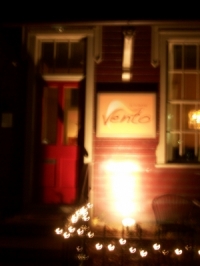 Vento La Trattoria’s cozy atmosphere has invited customers in to dine since the restaurant’s opening in July. Tiramisu and cheesecake greet customers from the case at the front. The smell of fresh herbs from the kitchen entices patrons to stay for an entrée before trying one of the tempting desserts.

The restaurant mixes a small town appeal with a fresh twist on Old World flavor. The menu offers a wide variety of favorites from Italian bruschetta and pasta to American gourmet soft pretzels. The food is reasonably priced; appetizers are less than 10 dollars and most entrées are below 20 dollars.

The restaurant opened a few months ago, but the menu still is evolving, Executive Chef Megan Armour said. “I like to change the menu with the seasons,” Armour said. Vento’s offerings are changed four times during the year to highlight seasonal fare.

Armour prefers to cook with locally grown produce. The fresh ingredients come from stands at the West Side Market. The restaurant’s bread comes from Blackbird, a local vegan company.

Armour became executive chef for Vento after perfecting her skills in Cuyahoga Community College’s culinary program, which is associated with the American Culinary Federation. “I love being able to run my own kitchen,” Armour said.

The restaurant’s popularity continues to grow despite hard economic times. Vento catches the business of its neighbor, Huntington Playhouse, before and after the shows. Armour said that the restaurant hosted a party for Mayor Sutherland’s reelection, as well as weddings Christmas parties.

“Our clientele is steady,” Armour said, “but there’s not a lot of familiar faces from Bay.” Waitress Meghan Stockdale, a lifelong Bay resident, said that she is surprised to not recognize the customers in such a small town.

The acquisition of liquor licenses has caused controversies with other Bay restaurants in the past. The prospect of rowdy customers and drunk driving caused residents’ concern. Vento began serving wine on January 1 after recently securing a liquor license, and doesn't anticipate any problems. “This is a new generation in Bay,” Armour said, “and they want their wine.”

Vento is open for lunch and dinner from 11:30 a.m. to 10 p.m., Monday through Sunday. The restaurant is located on Lake Road, across the street from Lake Erie, in Huntington Reservation.

Submit New Event
Saturday, August 8:
10:00 AM - 11:00 AM - Support for a Child or Teen with Cancer, Including Siblings and Parents