by Peter and Robert Slater 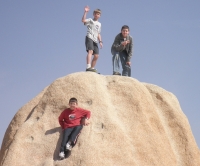 Peter Slater (left) and his brother, Robert, stand atop a rock at Joshua Tree National Park in California. Younger brother Christopher rests in a comfortable spot halfway up. The boys love rock climbing, camping and hiking and have explored more than 150 National Parks, earning over 50 Junior Ranger badges.

[Editor's note: Every four years the Boy Scouts of America holds a celebration of Scouting, a ten-day event where scouts camp out, try new activities, interact with sports and entertainment role models, and reaffirm their commitment to the Scouting movement. More than 45,000 Boy Scouts and adult leaders from all 50 states and 26 countries converge on Fort A.P. Hill, Virginia, to take part in the Jamboree’s many activities, including: boating, snorkeling, scuba-diving, flight simulation, wall climbing and archery, to name a few.

The Observer is proud to have two scouts "on assignment" – Peter and Robert Slater of Westlake – reporting back to the community on their experiences at the 2010 National Scout Jamboree. They will be working with journalists and educators as part of the “National Hometown News Service.”]

The National Scout Jamboree is held every four years, but this Jamboree is special because this year is the 100th Anniversary of Boy Scouts of America and the 110th Anniversary of Boy Scouts world wide. This article features just a small glimpse of the story of Troop 1305 [one of four Cleveland-area Jamboree Troops] and their experiences at the 2010 National Scout Jamboree at Fort A.P. Hill, Virginia.

It all started at around 11:00 p.m. on Sunday in the parking lot of the Cleveland Visiting Nurses Association building as the four buses departed for the Jamboree. We drove for hours, many of us unsuccessfully trying to get some sleep, while others loudly sang, shouted and generally goofed off. At 2:00 a.m., we stopped at a rest-stop where many scouts purchased soda, coffee, and energy drinks, fueling the noise and sleeplessness further.

By 4:00 a.m., the caffeine seemed to have gotten out of everyone’s system and all was quiet. At 7:00 a.m., we arrived at a breakfast buffet. Around 9:00 a.m., we left the buffet and half an hour later we arrived at Fort A.P. Hill, the home of the National Scout Jamboree for the last 29 years. After a thorough security check in, with drug dogs and all, the buses dropped us off at our camp sites.

After two hours of set up, we had a small bagged lunch and set off to explore the Jamboree. While several other scouts went to the action centers, climbing walls, pioneering center, or scuba, my brother and I spent our time trying to find the Hometown News tent among the hundred square mile camp. We registered and caught a bus back to camp.

At camp, we ate pulled pork and baked beans for dinner and then spent an hour cleaning up. After dinner we went to the trading post until lights out. At 10:00 p.m., it was lights out and we climbed into our sleeping bags and went to sleep, thinking about the many adventures that awaited us in the upcoming days.

Read More on Scouts on Assignment