George Cooley: Champion of the farmer 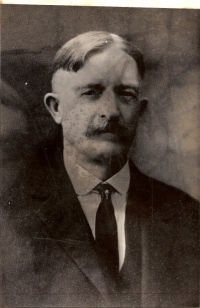 I recently had the pleasure of interviewing Mr. and Mrs. Roger Cooley at their home in Westlake. I wanted them to share the story of Roger's "Uncle George" so I could pass it along to our readers.

George Cooley, affectionately called "Uncle George," was born in 1861. He was raised on a farm on Dover Center Road at corner of Hilliard Boulevard. After attending school in Dover, George went on to Ohio Northern University. George came back to Dover to teach for ten years.

He taught at the Osborn School, located in what is now Bay Village, then taught as well in the old Red Brick School on Dover Center Road. George Cooley was a builder and would build many of the homes and barns in and around present-day Westlake. He was also the contractor for the water tower at Huntington Park. At the turn of the century, when Cooley became a contractor, he became very interested in road building, as well.

In 1904, he took his talents to Columbus where he built the pavement of Neil Avenue through the campus of Ohio State University. George was instrumental in his work with the federal government and the development and organization of the state highway departments of California, Louisiana and Ohio.

Having come from a strong farming family and community, George turned his attention to the problems facing farmers. He felt strongly that farmers must organize to protect themselves. In 1915, he organized the grape growers of Cuyahoga County and in 1918, he helped establish the Ohio Farm Bureau Federation.

George could also be found in the state legislature, working, as always, on behalf of the farmers. Mr. Cooley recieved the second medal offered for service to Agriculture from President Coolidge at a 1929 Farmer's Bureau convention in Chicago.

In 1920, he and Murray D. Lincoln founded the Farm Bureau Mutual Auto Insurance Company, which is now known as the Nationwide Insurance Company. George served as the company's first president until his death in 1939.

In 1971, the Ohio Agricultural Council honored Mr. Cooley by inducting him into the Agricultural Hall of Fame.

Lysa Stanton is president of the Westlake Historical Society.