Michael Symon's B Spot is the spot to eat 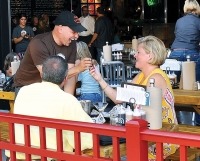 As if Crocker Park didn’t already have plenty of dining choices, let's throw in one of Cleveland’s most recognizable restaurateurs in Chef Michael Symon‘s B Spot.

The company culture is run with a no-nonsense attitude. There are no reservations, they don’t care who you know, and there is absolutely no whining allowed.

Personally, I was very excited at the prospect of a Michael Symon restaurant coming to Westlake. So when the opportunity arose to be at the Friends and Family Night before their July 13 Grand Opening, this long time veteran of the restaurant industry and now Food Reviewer was honored to be included.

Approaching the restaurant, one can’t help but notice that the entire front wall opens to the outside. Upon first entering, the eye is drawn to the huge beer can collection adorning the wall by the bar. On the opposing wall is artwork ranging from Andy Warhol-styled burgers to a Holy Cow all put together by Michael’s wife, Liz, and interior designer Scott Richardson.

The full service bar, which anchors this industrial styled space, allows you to drink what ever you want. The beer menu reads like a who’s who of breweries, categorized in a way that even a novice froth blower knows what to order.

At first glance of the menu I thought, “it’s bar food with an attitude.” Setting yourself apart in the restaurant industry is what makes great success. The B Spot’s way is by serving custom blended and naturally raised beef from New York’s premier meat supplier, Pat La Freda, and Michael’s own bratwurst recipe made special by Cleveland‘s own Blue Ribbon Meats.

When ordering, remember everything comes at once, they don’t serve in courses.

My wife and I tried to sample as much as we could possibly eat. His signature Lola Fries ($4.00) were uniquely seasoned with sea salt and rosemary, and the B-Spot Onion Rings ($5.00) were nicely batter-dipped and very crispy. Don’t forget to try the myriad sauces on the table to accent any dish.

My wife ordered the Symon Says ($8.00) – the burger topped with fried bologna, coleslaw, whip sauce and American cheese was a great blend of flavors and absolutely delicious. I had to pry it from her hands just so I could get a taste.

I opted for Mr. Porky ($6.00), a bratwurst topped with pulled pork, pickled jalapenos, and shredded Cheddar cheese. Yes, it was just as tasty as it sounds. It would have been very easy to order the Stadium Style ($5.00) with caramelized onions and stadium mustard but I’m always committed to ordering something original.

We complimented our meal with an outstanding Vanilla Bean Apple Pie Bacon "Bad**s Shake" ($5.00). The sweet and the salty mixed to make a great flavor, and so thick you could eat it with a fork, but they supply an enormous straw that does the job. Oh, and for an extra $3, they’ll drop in a shot of bourbon to make it a true adult shake.

I picked out a few other items I’m sure to try on my next visit. When I saw the Old School fried bologna ($6.00) with pickles, mustard and American cheese, it took me back to my Grandma Novak’s kitchen when I was a child growing up in Lorain, I just can’t wait.

I would be remiss if I didn’t mention the Why?? sandwich ($7.00) – Portabella mushroom, pickled onion, arugula, choice of cheese and optional bacon (free of charge) – enjoy the laugh, I did.

As we dined, Michael took the time to stop and talk to us. We enjoyed a few good laughs as we shared pictures of our both of our bulldogs; he has two, we have one. I told Michael that I actually remember the first meal I had when his restaurant Lola first opened and was originally in Tremont. He laughed and said, “I forgot that I had that as a menu item.”

I asked him why he chose Crocker Park for his latest venture, and he replied, “We had been looking for a Westside location for some time and the opportunity presented itself at Crocker Park. I have a business relationship with Bob Stark, the developer of Eton – the location of the first B Spot – and, it just so happens, [Stark is also the developer] of Crocker Park. It was just a perfect fit."

This down-to-earth chef, who takes such pride in being from Cleveland and promoting it, added: “I wanted to make my food accessible to everyone.”

If passion is a sign of success, then I believe the sky is the limit for Michael. You can see it in him personally and it radiates through every level of the people he employs.

The B Spot is not just another burger joint, it’s Chef Michael Symon’s take on an American classic.

Steve Novak is a Westlake resident and 30-year veteran in the restaurant industry, working at all levels from dishwasher to manager to chef/owner. The Observer makes two anonymous visits per restaurant and does not accept complimentary meals.