by Lysa Stanton and Dave Pfister 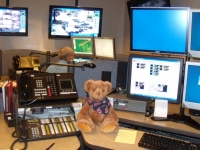 Hey kids (of all ages), "Dover" the wandering Bicentennial Bear from the Westlake Historical Society has found another interesting and historical place! Every month, Dover travels to a different location in Westlake and reports back to us on what he finds.

Earlier this month, Dover Bear saw a Westlake police cruiser checking on the Clague House Museum and was reminded just how hard working and dedicated our police officers are. Since Dover realized he did not know a lot about what happens behind the scenes with the Westlake police, he decided to stop at the station and ask.

Dover met Captain Guy Turner and was given the opportunity to learn more about what the police do and what it means to "protect and serve"!

When Dover sat inside a police car, he was surprised to learn that most have an on-board computer. He also saw the controls for the lights and siren, as well the communication radio and the radar system. Captain Turner was proud to say our Police Department is well equipped!

Then Dover met the nice and helpful members of the dispatch department. He noticed several computer screens and a communication system that appeared to be very complicated. Captain Turner said this is a very important department because they help the officers who patrol in the police cars.

After meeting all the friendly people at the Westlake Police Station, Dover went outside to visit Safety Town. There he found a small model of the Police Station and City Hall, as well as lots of other buildings that were more his size. Dover learned that Safety Town is place were children go to learn about traffic signals and how to be safe when crossing city streets.

Dover also learned the three most important numbers to remember: 9-1-1. He learned that if you ever need help and it is a true emergency, then you can pick up a telephone, dial the numbers 9-1-1, and a nice person will answer the phone and help you!