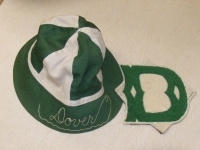 The Historical Society keeps a list of the top 20 questions we are asked. One of the questions on the list that comes up quite often concerns the history of the use of a Demon as the high school symbol.

Back when Westlake was still known as Dover and the high school was Dover High School, members of its athletic teams would proudly wear varsity jackets with the letter "D" sewn on. It was a badge of honor for the young men and those belonging to this exclusive club were known by their peers as the “D-Men.”

In 1950, ten years after Dover Village became Westlake, the high school was renamed Westlake High. During that time, team mascots or emblems were growing in popularity, and many schools in the surrounding cities were selecting their own.

Westlake, reluctant to replace the time-honored D-Men nickname, simply transitioned to the Demons.