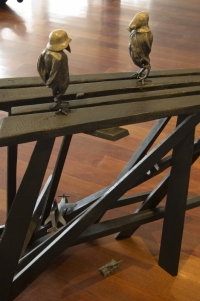 A panel of highly qualified and gifted artists will discuss “Issues in Contemporary Sculpture” on Tuesday, Oct. 30, at 7 p.m. at Westlake Porter Public Library. Ann Albano, executive director of The Sculpture Center in Cleveland, will moderate the panel discussion. Following the panel’s dialog, there will be time for audience questions and responses.

Albano will begin the program with a PowerPoint presentation on the Cleveland-Boston Sculpture Exchange which was held this past summer. The exchange brought the works of ten Boston sculptors to Cleveland while works of 12 northeastern Ohio artists were exhibited in Boston.

The panel of four Cleveland-based artists who will share their expertise are Elizabeth A. Emery, Irina Koukhanova, Nancy Prudic and Robert Thurmer. Each of their life stories, schooling and experiences are as unique and individual as their art, which was included in the Sculpture Exchange.

After growing up in a mix of harsh city life (Philadelphia) and the countryside (Lawrenceville, N.J.), Emery graduated with degrees in art history and Italian studies from the University of Pennsylvania. Following a move to New York City, where she became a textile designer, she made a 180-degree turn and professionally raced bicycles in the United States and throughout the world.

After earning a MFA in 2008, Emery focused on ceramic-based mixed media sculpture and collaborative community projects. She has experienced life in many locations around the world, but Emery now resides in Cleveland, where she currently teaches upcoming artists at the Boys and Girls Club after-school program and is intern residency coordinator at Zygote Press.

Koukhanova was born and educated in Russia. Following studies at the Moscow Institute of Art and Industrial Design, she received a master’s degree in the United States. This prolific artist has been a head of the sculpture program at Cleveland State University, has three completed public art commissions and full scholarship residencies at Sculpture Space in Utica, N.Y., Santa Fe Art Institute, Vermont Studio Center and others. “I address Time and Conflict from my own perspective as an American, an immigrant from the former Soviet bloc and a humanitarian,” Koukhanova said.

Prudic, who is an associate professor of visual art at Lake Erie College, states" “The human figure is a powerful image that has been used non-stop since humans began to make images.” Exploration into hidden meanings of images of the human figure fostered Prudic’s bountiful production of art and instruction. In addition to her many solo exhibitions, she has been a visiting artist at the Thai Chinese International Institute in Bangkok and has participated in Light Festivals and Parade the Circle at the Cleveland Museum of Art. She serves on the exhibition committee at The Sculpture Center and is a founding member of the board of trustees at Arts Collinwood and member of the gallery committee.

Thurmer was born and educated in Vienna, Austria, and moved to the U.S. to further his studies of art. He received a BFA from Syracuse University and a MFA from Rhode Island School of Design and is currently the art gallery director at Cleveland State University as well as a teacher of museum studies, studio art, sculpture and drawing. Locations of his numerous major international solo exhibitions include New York, Beijing, China, Paris, France and Weilheim Teck, Germany.

Albano’s master's degree in art history and more than 35 years of experience in managerial positions in museums in Philadelphia, New York and Washington will serve her well as moderator of this fine panel of artists. This program is presented free and open to the public by the Westlake-Westshore Arts Council at Westlake Porter Public Library, 27333 Center Ridge Rd.