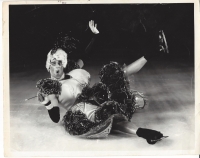 Kevin Bubp, pictured here in a promo for his early 1970's ice comedy act "Mae East," traded in his skates for a tool belt and has entertained residents of the Knickerbocker for the past six years.

The first time I went to the Ice Follies touring ice skating show, I was infatuated with the clown who skated around dressed as a woman, jumped barrels and completely captivated the audience. He made me laugh so hard I thought my sides would split. I laughed at him when I was a kid and laughed some more when I was a mom who took the kids to the Ice Follies.

I love ice shows. The music, lights, costumes and skaters always transport me to a magical world. I've never seen a bad ice show. The choreography is always dazzling. Once in a while a skater may take a tumble or move out of sync, but no one is perfect.

I never thought I would become friends with my favorite ice skater. When I moved into the Knickerbocker Apartments in Bay Village, the first person I met was Kevin. He worked as a maintenance technician. I liked him at once. His sunny smile and wry sense of humor delighted me. I knew he was in show business when he was younger. When I discovered he was a clown in the Ice Follies, I couldn't believe it.

Kevin was not only a clown, he was THE clown who took the biggest falls, made the loudest noises and wore a blond wig with pizzazz! Kids rooted for him when he couldn't catch up to the other skaters and laughed hysterically when he took one fall after another. Kevin is quite the showman. I feel honored to know this man who gave his all to put on a great show.

Kevin likes to reminisce. He is a storyteller. A two-minute ride up the elevator with Kevin usually adds to the list of stories I have grown to cherish. Now retired, Kevin fills in at the Knickerbocker when needed. I can't begin to tell you how much everyone at the Knickerbocker loves Kevin. He's never too busy to say hi, smile or crack a joke.

Thanks, Kevin, for making me laugh when I took the kids to the Ice Follies and thanks for brightening my days here at the Knickerbocker. You are an awesome gentleman who has enriched my life and the lives of so many. Let's hear it for Kevin Bubp, skater extraordinaire and dear friend.

[Editor's note: Kevin Bubp has been with the Knickerbocker Apartments for more than six years. He has spent those years making everyone laugh on a daily basis and is absolutely beloved by the residents and staff. Tragically, Kevin is in a fight for his life as he is battling lung cancer. Hospice has been called in and Kevin is in the prayers of all who know and love him. The Knickerbocker residents recently held a fundraiser to help with his medical expenses. Anyone interested in making a donation can contact Anne Naumann at anne.wssc@yahoo.com.]