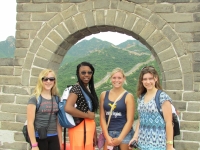 Girl Scouts from Northeast Ohio – from left, Lara Cox of Solon, De'Auntranay Nunn of Cleveland and Erin Thomas and Katie Routhier of Westlake – visited the Great Wall during their summer trip to China. Photo by Judy Routhier

When I joined Girl Scouts as a shy kindergartener, I didn’t realize the amazing opportunities this organization would provide.  Ten years later, I found the GSNEO (Girl Scouts of Northeast Ohio) international travel group. I learned that they were headed to China, a country that has fascinated me since the fourth grade.

On June 17, 2013, after two years of fundraising, we boarded a plane that flew us over the North Pole. We hit the ground running for 10 days of sightseeing in four different cities: Beijing (Tiananmen Square, Forbidden City, Summer Palace, Temple of Heaven, The Great Wall), Xi’an (Terra Cotta Warriors, Wild Goose Pagoda), Shanghai (World Financial Center, Jade Buddha Temple) and Hong Kong (Lantau Island Buddha, Victoria Harbour). It was humbling to stand on the Great Wall, snapping perfect photos from every angle. I was awestruck at the sight of some of the 8,000 life-sized terra cotta warriors, built as funeral art for an emperor in 210 B.C.

This trip was more than just the sights. Each day brought new surprises. There was a dinner prepared by a family in the Hutong (Beijing’s old neighborhood), stretching cocoons during a silk factory tour, calligraphy classes in an art museum, dinner theater, traditional tea tasting ceremony, an acrobatics show, meeting Chinese students, a “master” tai chi session, swimming in the South China Sea, playing “hacky sack” with a few of the hundreds of elderly residents in a local park, and more.

In addition, we marveled at our modes of transportation, which included a tram, dragon boat, double-decker bus, sampan (tour of “boat people” village), bike and rickshaw.

While some people might worry about the cultural differences or language barrier associated with travel to China, I found that they greatly contributed to my experiences. Learning a few basic words and phrases before we left did help, but smiling and “charades” are ultimately universal.

Western influence was definitely present. If you really wanted a 7-11, McDonald's or KFC, you could find it. There were even seven Starbucks in the Hong Kong airport. Interestingly, the menus at them varied significantly and were more expensive than local cuisine (red bean and green tea frappes were popular at Starbucks). I remain thankful that most of us chose to eat as the locals did.

One experience I couldn’t anticipate was being a “model.” While we were touring some of China’s largest cities, so too were Chinese people from remote villages, who had never seen “Westerners” before. Because of this, they were truly fascinated with us. Ultimately, we all had our pictures taken hundreds of times. If we were composing a group shot, we knew the locals would “photo bomb” us by jumping in at the last minute! We just went with it, smiled and chalked it up to the experience.

Early on, we learned that no question was off limits for our knowledgeable tour guides, from the “one child policy” to cultural superstitions. In return for this sharing, we asked one tour guide if he had questions about America. After careful thought, what he wanted to know was why we would let a 16-year-old drive our cars!

I remain thankful for the experience. I couldn’t have asked for better peers/roommates. I am also glad that my mother was able to join me on the trip. My last name (loosely translated) means “traveler.” I am grateful for the opportunity to live up to my name on this trip and a prior one to New Zealand and Australia in 2011. Hopefully, I can inspire other girls in the area to look into this amazing Girl Scout pathway.

Katie Routhier is a senior at Westlake High School. She has received her Bronze, Silver and Gold Awards – the highest available to Girl Scouts.