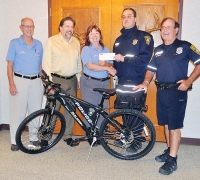 Westlake police officers will be patrolling the streets on some sweet new wheels, thanks to a donation from the Elks.

Lakewood Elks leaders Maria Gregg, Stan Soja and Bob Geiger presented a check for $750 to Lt. Ray Arcuri and auxiliary officer Rick Grane on Nov. 4 at Lodge #1350 on Center Ridge Road in Westlake. The funds will help to cover the cost of a new Raleigh Talus bicycle for the department, bringing the number of bikes at its disposal to more than a dozen.

The bikes are a valuable tool for Westlake police and auxiliary officers, according to Lt. Ray Arcuri.

“Bicycles supplement the motorized patrol,” Arcuri said. “They are more approachable; people flag you down … it invites comments and questions. You’re able to use more of your senses, like smelling marijuana smoke, and your vision and hearing are better.”

The Westlake PD primarily uses the bikes for community relations activities, like crowd control at parades and fireworks shows, the annual bike rodeo for children and park patrol. But the two-wheel cruisers also come in handy when agility is needed, Arcuri explained. Officers on bikes can jump curbs and cut across fields if necessary. The bike patrol is also more nimble in traffic, as a recent arrest at The Promenade illustrated.

When a call came in about shoplifters at Giant Eagle, Arcuri said, the responding patrol car was stuck at the stoplight at the Detroit-Bradley intersection. A bike officer, bypassing the traffic, made it through the intersection first and arrived on the scene just in time to catch the fleeing suspects.

The bike patrol season runs roughly from March through October, depending on weather conditions.

This was the second partnership in recent months for the two organizations. In August, the Elks gave a $2,000 grant to the Westlake D.A.R.E. program.