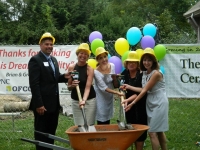 On Tuesday, Aug. 26, the BAYarts campus celebrated the groundbreaking for the Karen Ryel Center for Ceramic Arts and Education.

Ryel, who had always been passionate about pottery, passed away on her 60th birthday in November of 2010. She was a devoted mother, grandmother, and student of BAYarts.

Gallery Director Eileen Stockdale spoke fondly of what Ryel brought to the campus. "She was so generous. And she made beautiful things. We had delightful conversations because her mother-in-law and my mother were friends."

Ryel had a connection to nearly everyone on the BAYarts campus, by virtue of being such a friendly spirit. Many of the current pottery students at BAYarts knew Ryel very well. But you can see how deep the admiration for Ryel goes when you see the deference that those who didn't know her have for her. Faculty member and artist Jessica Ramage had a somber, humble smile as she explained that she'd sadly missed out on knowing Ryel by just a few months.

With such a sweet nature, it makes sense that a studio in her honor should be built. Enter: Gretchen and Brian Colleran. Gretchen and her daughter share a love of art that was brought to them by Gretchen's mother, Karen. And with a new ceramics studio, they and many other students will get to work in a new, productive environment as they create their art.

In attendance for the event were State Rep. Nan Baker, Mayor Debbie Sutherland and Cleveland Metroparks Director Brian Zimmerman. BAYarts staff and faculty, the core group of adult pottery students, board members and more added their faces to the collection of people who stood behind the Huntington House to see the spot that is being turned into the studio.

The current pottery studio space is old – a dank, mostly windowless area in the basement of the historic home. It was never a question of whether BAYarts needed a new studio. After her mother passed away, Gretchen Colleran and her husband, Brian, stepped forward to say they'd like to help be the driving force to make that happen in honor of Ryel.

Ceramics Director Moira Beale spoke at the groundbreaking of what a devoted and kind soul Ryel had. "I can't think of another person more deserving of having the studio named after her."

The intimate affair was an uplifting celebration that illustrated how strong remembrances of beautiful people can be made into ever-present reminders of how the arts can bond people in remarkable ways.

Classes for the Karen Ryel Studio are expected to open in winter 2015.

Jessica Stockdale is a professional writer and a volunteer at BAYarts.