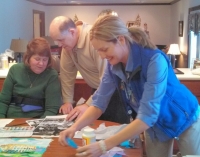 Michele and Joe Tripi work on a collage commemorating a 25th wedding anniversary trip they took to Rome under the guidance of art therapist Holly Queen.

Public discussions about dying are rare. However, a recent news story about Brittany Maynard, a young woman with brain cancer, has brought the taboo topic into the public eye. Maynard chose her time of death by taking medications prescribed by her doctor (a legal option in Oregon). The widely publicized case also points to a need for greater awareness about care options for patients with life-limiting illnesses.

Hospice of the Western Reserve is committed to debunking myths that can prevent people from making informed decisions about how they choose to live the final phase of their lives.

“One of the best ways I have found to help educate people who don’t understand hospice is to explain that it’s not about dying until you die. It’s about living until you die,” said Westlake resident Bob Phillips-Plona, director of residential services at Ames Family Hospice House in Westlake and David Simpson Hospice House on Cleveland's east side.

Hospice does not endorse or engage in euthanasia or assisted suicide. Its philosophy is founded on the principle that every individual deserves to live the best quality of life through the entire spectrum of life, including the final phase. Medical care and management of a disease do not stop when a cure is no longer an option. Instead, the focus changes to making patients as comfortable and independent as their situation allows, so they can enjoy quality time with their families and focus on what is meaningful to them.

A Gallup poll reveals that close to nine in 10 adults (88 percent) prefer to die in their homes, free of pain, surrounded by family and loved ones; hospice care is focused on making this happen.

Michele Tripi, a west side Hospice of the Western Reserve home care patient, was diagnosed with ALS (also called Lou Gehrig’s disease) at the age of 55. The disease progressively disables nerve cells in the brain and the spinal cord, ultimately leading to death. One by one, ALS takes capabilities away, like the ability to walk, sit upright, use one’s hands, and eventually, even to speak.

She was introduced to the idea of utilizing hospice earlier rather than waiting until the final few days of life when she and her husband, Joe, began attending a support group offered by the Northern Ohio Chapter of the ALS Association. The group provided insights on adaptive medical equipment she could use to safely maintain a degree of personal independence and autonomy.

The family’s home was modified to make it easier for Tripi to navigate; she also completed her advance care directives so her family wouldn’t be left guessing about her desires. Knowing her prognosis, Tripi did not want to have strangers involved in her care. Hospice of the Western Reserve’s team, including  a physician who is board certified in hospice and palliative medicine, a nurse, social worker, nursing aide, music, art and massage therapists, spiritual care coordinator and volunteers, worked with Tripi and her family to create a plan of care tailored to her needs and wishes.

Her music therapist arranged to have some of Tripi’s poetry set to music to create original songs. Her art therapist helped her make new memories with her grandkids – including a tea party at her kitchen table complete with homemade hats. Working with the art therapist, Tripi has also created several legacy pieces for her family, including a poignant and beautifully written book about her life and special memories. She and her daughter, Jackie, combed through family photos and worked together to create the keepsake book. Hospice of the Western Reserve used funds from their life enrichment fund to have it professionally bound and published, and made copies for family members.

Tripi’s experiences have led her to become a leading educational advocate for hospice. “It doesn’t improve the quality of your life if you wait till the end,” she said. “I stayed healthier, stayed happier being at home. Hospice has been a key factor in that.”

Laurie Henrichsen is Public/Media Relations Manager for Hospice of the Western Reserve.