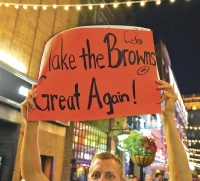 A Browns fan displays his own wish for “greatness” during the Republican National Convention in downtown Cleveland. For more photos by photographer Denny Wendell inside the RNC, visit facebook.com/wbvobserver.

As our beloved Cleveland Browns open training camp with a squad destined to finish in double-digit losses yet again once the season begins, I’ve been doing a lot of thinking. A couple of migraines later, I've came to one obvious (to me) conclusion as to what the Browns could do to improve the team immediately in 2016: more coaches.

A perusal of the current Browns coaching staff indicates there are (including head coach Hue Jackson) twenty-seven – count ‘em, 27 – guys who make a very good living helping football players make an even better living than they do. There are eight offensive, eight defensive, three special teams, and seven strength & conditioning coaches. And with a 53-man roster it means there is essentially a coach for every two players! Obviously, this is a wise investment for the organization, since the same strategy last season resulted in a whopping three wins.

Just for grins, let’s look at the strength & conditioning coaches. First, there is a Director of High Performance. (What is this, NASCAR?) Then, you have your Strength & Conditioning Coordinator. (Okay, I get the strength & conditioning part, but what’s with the “coordinator” part? Does he tell people where to stand? Maybe we need a choreographer instead.) Third, we have the Strength & Conditioning Coordinator (Wait, I think I just had a déjà vu moment, because I could have sworn I said we had one of those already. I double-checked and yes, we do have two, probably in case one calls off with a tummy ache, as those deep knee-bends can wreak havoc on your digestive system).

Next we have a pair of Strength & Conditioning Assistants. (Hey, somebody has to get the coordinators their coffee, right?) Sixth, there’s a Sports Scientist, whom I must assume is trying to develop a formula for winning football, as it hasn’t been available in these parts for a long, long time. And finally, we have a Skills Development guy, which at first glance seems unnecessary for guys who all graduated (wink-wink) from college. Maybe his job is “remedial” stuff, like, “Today, gentlemen, we attempt to spell C-U-Y-A-H-O-G-A. I know we can improve upon last year’s 26 percent success rate …”

Incredibly, that’s only seven of the team’s 27 coaches. Consequently, I say the obvious answer is to hire even MORE coaches. But I think the Browns have missed the boat in not hiring coaches for other areas which I think they need desperately. For instance …

Hypnosis Coach: You’re only as good as you feel, right? And nobody on the Browns roster feels all that good, primarily because they are on death’s doorstep of – and I use the term loosely -- “pro” football. I mean, if you can’t make it here, your career is pretty much over. We need someone to do a Svengali number on the squad so they think they really are winners, like the Patriots, Broncos, or (gulp) Steelers.

Besides, I think having someone put the team to sleep is only fair because, since 1999, we’ve all been put to sleep during most Browns games. Our problem is, we wake up!

Lifelong Westlake resident who dabbles in writing whenever the real world permits. My forte is humor and horror...What a combo!