Watching TV once took some effort 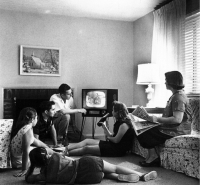 A family gathers around the TV, while Dad adjusts the picture, in this 1958 photo from the National Archives.

As summer blends into autumn, with the weather turning cooler and daylight hours getting shorter, folks tend to spend more time indoors and often place more emphasis on television viewing than during the warmer months.

These days, the main challenge of TV viewing seems to be following circuitous plot lines and enduring long blocks of commercials. Conversely, while rather young at the time, I recall when watching television was much more challenging, both technically and physically.

Going back to a time when most families shared their viewing on a single television set (and that most likely being black and white) one could tune in any channel they wanted – as long as that channel was numbered three, five or eight on the original VHF band in the Cleveland market.

In 1965 a fourth channel appeared in the Cleveland area on a new-fangled thing called UHF. That was a public broadcasting station, WVIZ Channel 25, and they focused on educational programming with content during the weekday specifically aimed at grade schools. At other times WVIZ offered much different programing than could be found on the three Cleveland area commercial VHF stations. Commercial television stations on channels 19, 43, 55 and 61 would eventually follow WVIZ on the UHF band.

The thing is, with the exception of some high-end sets of the era having rudimentary remote control systems, viewers actually needed to get up from their seats and walk to the TV to change channels via set-mounted selectors. Not only did one have to physically turn a dial on the set to select a channel to view, one also had to “fine tune” that channel; on VHF by rotating a ring encircling that band’s channel selector and on the UHF band attempting to “zero-in” the channel by turning the tuning knob either direction in increasingly smaller increments until the best picture was obtained.

Of course, getting a channel fine-tuned didn’t mean that channel would stay fine-tuned indefinitely. Normal drifting of a television’s tuning circuitry, as well as unsettled local climatic conditions, could cause the need for further tuning to regain a satisfactory picture.

If that’s not bad enough, in the “good old days” television sets had two pesky and often finicky little knobs, typically placed inconveniently somewhere around back, called “horizontal hold” and “vertical hold.” It was often necessary to repeatedly get up from one’s viewing position to adjust one or both of these knobs in order to see a stable, viewable picture, especially as the set warmed up and the set’s circuitry stabilized (which could take a while with older models). Adjusting those two hold controls tended to become something of an art.

With the steady, sharp and color-rich picture one can enjoy from even a modestly priced television with the mere flick of a remote button from anywhere in the room, it’s kind of fun to remember the days when TV viewing took a bit of physical effort.