Being green at the World Series 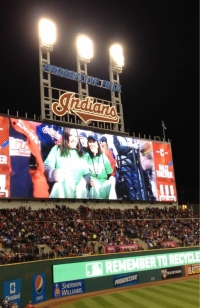 Bay Village Green Team volunteers Lauren Hricik and Laura Anderson are featured on the Progressive Field scoreboard during game 1 of the World Series on Oct. 25. Photo by Tara Wendell

Wow! What a year for Cleveland sports. It’s amazing that the Indians are in the World Series! What an opportunity to showcase our city yet again on the national stage … and have a chance to bring another national championship to our city! Speaking of amazing opportunities, The Bay Village Green Team was asked by the Indians to provide volunteers for the Fall Classic for a recycling initiative from Major League Baseball!

In 2005, MLB was the first professional sports league to partner with the Natural Resources Defense Council to form the “Commissioner’s Initiative on Sustainable Stadium Operations,” now known as “MLB Greening Program.” The Greening Program is an environmental data collection system, which analyzes stadium operations and encourages teams to share information about their environmental efforts and successes.

The “Green Track System” is being used by most clubs to track energy use, water use, waste management and recycling, and paper purchasing. Instituting conservation practices within ballparks saves clubs money, and costs the environment less too – it’s a win-win!

MLB’s “World Series Green Team” started in 2010 during the Rangers versus Giants World Series. The goal was to promote environmental sensitivity within all aspects of the game, and help ensure the World Series doesn’t make a large, negative impact on the environment.

The Bay Village Green Team had the opportunity to provide 40 volunteers per game to collect recyclables from fans. During inning breaks, volunteers walk the aisles to collect empty plastic cups and bottles and aluminum cans. The effort went very well games 1 and 2, and will continue in game 6 (and game 7, if needed).

I was one of the volunteers for Game 1. Overall, I think the effort is very admirable. I love that MLB is concerned about this and wants to make an extra effort to recycle. I was also thanked multiple times by fans who truly were grateful for our efforts. Volunteers have given me very positive feedback as well, saying the program was great and they had a wonderful time.

I have to say, though, that there is a LONG way to go in terms of recycling at the games. Progressive Field has recycling bins all around the stadium for fans to recycle on their own. Despite the World Series Green Team’s efforts and the fact that there are recycling opportunities everywhere, when you looked into the trash, it was still filled with cans, plastic bottles and plastic cups. This was the case, even with recycling receptacles placed five feet away from the trash. I am not sure where the disconnect is; if it’s true apathy, that people just don’t care, or they don’t know how important it is to recycle and keep those items out of the landfills.

Progressive Field strives to be one of the greenest ballparks in the MLB. In 2012 a corkscrew-shaped wind turbine was installed atop the stadium. Front offices and the ballpark recycle plastic, cardboard and aluminum. Their initiative “Our Tribe is Green” was launched in 2008, and includes organic waste composting, installing only LED signs, and using Green Seal-certified paper hand towels, toilet paper, tissue, and cleaning products.

Since incorporating these efforts, the Indians have reduced the number of trash pick-ups by more than 60 percent since 2007. They have also avoided 74,000 tons of carbon dioxide emissions since 2009. Additionally, Progressive Field is the first ballpark in the United States to go solar. This is something to be proud of, Clevelanders!

I want to ask you, my readers, if you have any ideas about how we can encourage people to take the extra effort to recycle when in situations like baseball games, basketball games, etc.? Placing recycling receptacles very close to trash bins doesn’t seem to work. Collecting them by hand from fans did work, but that isn’t always feasible. What do you think? Please email me your thoughts at Jennifer@bayvillagegreenteam.org.