The story on an interesting Bay Village address 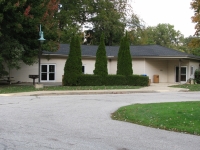 The view of the Bay Lodge from the parking area behind the building.  One can see the inviting nature and accessibility of the building from this vantage point.

While the address 492 Bradley Road in Bay Village might sound familiar to some people, many may not know of the various reasons for its notoriety.

The most obvious and current reason is that it’s the location of Bay Lodge. More about that later in this story.

Though many historically minded folks are likely already aware, I was surprised to recently discover former Bay Village Mayor A. Horace Wolf (serving in that capacity from 1910 to 1916) lived in a house previously standing at that address. According to a Dec. 29, 1931, Plain Dealer obituary, Mr. Wolf was born, raised and passed away on a farm at 492 Bradley Road.

The obit goes on to state Wolf Road in Bay Village is named in his honor and Mr. Wolf also operated a small flying field on his farm, as well as Lake Erie Air Services Inc. A notable resident of that address, indeed.

A later resident of 492 Bradley also achieved local, and in maritime circles, international notoriety. He was William E. Zimmie and his identifying accomplishment was the invention of a chemical compound that loosened and dissolved mud and sludge tending to build-up over time in ship ballast tanks, as well as other industrial equipment.

Returning to the subject of the Bay Lodge, it possesses an interesting background as well. Essentially occupying the spot at which Mayor Wolf’s home once stood, a Plain Dealer classified ad announcing a public hearing regarding the intention to build the Bay Lodge ran on Oct. 10, 1972. Construction of the facility began sometime later.

Standing on city-owned land through a leaseback arrangement, construction of the Bay Lodge was an undertaking of the Bay Village Jaycees. The old Wolf house was demolished to make way for the new structure. I feel a bit of a connection to the Bay Lodge as I had the opportunity, while a Bay High student, to help with a number of finishing tasks in the building’s construction.

I stumbled upon the chance to spend many Saturday mornings, if I recall correctly starting in the autumn of 1974 and running through the winter of 1975, assisting Bay Village Jaycee members in completing their project.

I enjoyed working with the Jaycees on the Bay Lodge project and looked forward to the Saturday mornings I was asked to show up. As an aside, I clearly recall the suspended ceiling installed in the building as being made by Donn Products across the tracks in Westlake. The Bay Lodge was officially dedicated in April 1975 and is owned by the City of Bay Village.