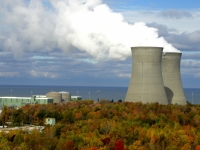 The Perry Nuclear Power Plant is one of two nuclear power reactors in Ohio. The other is the Davis-Besse Nuclear Power Station in Oak Harbor. Photo courtesy First Energy.

Part three in a series about how Ohio sources its energy for electricity.

In Ohio, about 14 percent of our power comes from nuclear energy. I’m going to try to explain it in simple terms, as researching this topic resulted in a lot of information that is very complicated with nuclear physics (which is not something I am interested in trying to explain in my column!).

Nuclear energy comes from uranium. Uranium is found in geological formations, as well as in sea water. It is the least plentiful mineral, however its radioactivity makes it a plentiful supply of energy. About one pound of uranium is equal to three million pounds of coal in terms of energy production. Uranium is mined, similar to how coal is mined, however it is more hazardous because of the radioactivity. Uranium must be concentrated for it to be mined, and most of the uranium in the U.S. is mined in Wyoming and the Four Corners region of Colorado, New Mexico, Utah and Arizona.

The United States has 99 nuclear reactors that convert uranium into energy for electricity. Two of these reactors are located in Northern Ohio; one in Lake County (Perry) and one betwen Sandusky and Toledo (Davis-Besse). For every unit of electricity produced by a nuclear power plant, there are two units of waste heat. Used nuclear fuel is very hot and radioactive. The waste must be cooled using water and the plant workers must be shielded. This hot, used fuel is removed from reactors underwater, and then transferred to a storage pool, where it can remain for up to 50 years. Another way this waste is dealt with is to transfer it to concrete containers.

Nuclear waste can also be recycled, as it contains up to 90 percent usable fuel. The United States used to have a recycling program for this waste, but shut it down in 1977 because recycling creates plutonium, which is the easiest material in which to make a nuclear weapon. France, Great Britain and Japan all have nuclear waste recycling programs. France generates 80 percent of its electricity from nuclear power, much of it coming from recycling nuclear waste. To recycle the waste, plutonium and uranium are separated from the other waste, and reused for energy, creating very little radioactive waste at the end of the process, which is then stored safely. France has been recycling nuclear waste for over 40 years without the radioactive material falling into the wrong hands. They have not had any accidental explosions either.

Nuclear power plants do not emit greenhouse gasses, so they are not contributing to global warming. They also do not produce any pollutants that can become airborne, like the burning of fossil fuels does. Aside from the environmental impact from the energy used to mine uranium, it is a clean energy. I hope you gained a better understanding of nuclear power after reading this!