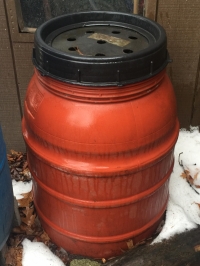 This backyard compost barrel has a removable lid for adding food scraps, ventilation holes to allow for faster decomposition, and an open bottom so worms can aid in the composting process. Photo by Jennifer Hartzell

Have you thought about starting to compost at your house and then you chicken out because you think it will be smelly or gross? If so, that’s what I thought for a long time, until I bit the bullet one day and bought a compost bin for my backyard. For the record, my husband was not thrilled, as he was afraid of the same thing, as well as attracting animals. I’m happy to report that it has been over a year, and we have not had any problems with gross-ness or animals!

When you Google “composting at home” it can be a little overwhelming, as there seem to be a million websites about methods, ratios, etc. Trust me, it is not that complicated; it’s actually quite easy!

I purchased a repurposed food barrel, turned into a compost barrel, from Rain Barrels N’ More in Westlake. I went to the store with the intention of getting a rain barrel, and I walked out with both a rain barrel and compost barrel. To be honest, I was feeling a bit intimidated by the entire thing, however, Ann (the owner) ensured me it’s a simple thing to do.

The compost cylinder (barrel) that I have is open on the bottom to the ground, allowing worms to crawl into your waste and compost. Additionally, the top, which is removable, has holes in it to allow air and rain water in, which are both important for composting. There are many different containers available for composting, including ones you can turn, and other types. It’s a good idea to check a few kinds out to see what would work best for your lifestyle.

After I bought the compost barrel, I wondered what I would keep the food scraps in until I wanted to dump them in the barrel in my backyard. I quickly searched my house and found one of those plastic cereal containers that I never use and decided that would be a good kitchen container: It seals at the top and was big enough for a couple days’ worth of scraps. It has worked perfectly. I throw the compostable waste into that, and when it’s full, I walk it into my backyard and dump it in the barrel.

What is compostable? Raw fruit and vegetable waste (but not citrus; citrus kills bacteria, you want to grow bacteria), egg shells, coffee grounds, black and white newsprint, fireplace ashes, dryer lint, and yard waste (leaves, sticks, etc.). When adding these materials, the smaller they are, the quicker they will break down, so crumble your egg shells and chop up vegetable/fruit scraps as much as possible. What shouldn’t you put in there? Do not put any meat, bread, dairy products or cooked food in your compost. If you follow these simple guidelines, animals will not be attracted to your compost.

How will you know when your compost is ready? You’ll know – it will look like dirt, dark and crumbly. When it looks like this, you can take it and spread it around your garden beds. It’s very good for your plants. Also, as my barrel gets full, I like to take a shovel and mix it up a bit, it seems to speed the process.

I hope I have helped make home composting seem a little less intimidating, and I hope you will consider trying it! If you are thinking about composting, Rain Barrels N’ More is hosting a free composting class on Earth Day, April 22, 2 p.m., at their new location in the former Bonne Bell building on Crocker Road.