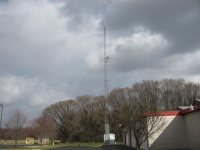 This tower is installed at a nonprofit agency in order to facilitate amateur radio communications that may help the agency carry out its mission.  This is the sort of antenna system that would have intrigued the author in his youth (and still does).

A recent drive on Lorain Road in Fairview Park managed to spark a feeling of nostalgia in me (not terribly difficult to do).

Traveling westbound on Lorain Road from Cleveland I happened to recall a very large amateur radio antenna, now long-gone, had once proudly presided over the northwest corner of Lorain Road and one of its intersecting side streets, near Fairview Park’s eastern limit.  On my recent drive I didn’t recall the exact side street.  Clearly recalled from a significant amount of time ago was the fact the amateur radio call sign of the antenna’s owner was prominently displayed on its support structure.

Using the same sort of research techniques I’ve employed in writing previous Westlake / Bay Village Observer submissions, I found just where the antenna once stood and that the amateur radio operator who owned it was once a very well known ham and long serving Fairview Park Fire Chief, of which I had no idea.

Establishing relevance to this publication, having grown up in the city, I came to notice several impressive amateur radio antenna installations in the western part of Bay Village as I ventured on numerous bicycle rides through the area as a youngster.  And yes, I likely was much more aware of antenna installations, amateur radio and otherwise, than most kids my age.

I spent my youth well before general use of the Internet was available to the public (the old ARPAnet was just being developed then).  At that time the options available for most people to communicate over long distances were either physically mail letters, pony up often significant amounts of money for long distance telephone calls or earn an amateur radio license and communicate with fellow hams anywhere from down the street to around the world.

With worldwide communication now inexpensive to cost-free and easily available to those with Internet access, one might tend to think the amateur radio option listed above is now obsolete and unnecessary.  To the contrary, it’s arguable that amateur radio is as relevant and useful as ever.

At the risk of sounding cliche, there are still numerous occasions of amateur radio initially being the only form of communication available into and out of disaster stricken areas.  With cellular and other telecommunication systems either damaged or overloaded, amateur operators can bypass local infrastructure and directly communicate radio to radio.

Technically speaking, many amateur radio operators are utilizing a wide range of modern digital communication formats over the air as well as experimenting with software defined radio, where a computer is integral to signal reception and transmission.  One can elect to be a very casual and recreational amateur operator or delve deeply in technical and experimental aspects of radio. As in the past, amateur radio remains a great training ground for people interested in electronics and communication.