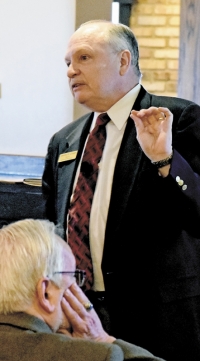 Controlled development and solid financial planning have played a major role in Westlake’s decades-long evolution from a quiet farming community to a thriving suburb. One might even say, in this American Greetings town, that growth and planning have been the hallmarks of Mayor Dennis Clough’s tenure. These topics always feature prominently in Clough’s annual State of the City address to the business community, and this year’s presentation was no exception.

Speaking before an audience of West Shore Chamber of Commerce members on March 14, Clough discussed his administration’s approach to managing Westlake’s transformation.

“We’ve had a history of good planning ever since I’ve been involved, for 32 years,” Clough said. “I think that’s one of the reasons why Westlake has become the very successful community it is today, because we didn’t just let things happen. We controlled the growth in the community and we had a lot to say with how it grew and what type of businesses, what type of growth was going to happen.”

Economic development has increased the city’s total assessed valuation year after year – topping $1.4 billion dollars in 2016, among the highest in Cuyahoga County. This allows Westlake to generate a healthy stream of revenue while keeping property and income taxes low.

“One mill [of property tax] raises a whole lot more money in Westlake than it might in another community,” Clough said, while presenting a chart showing that Westlake’s residential property tax rates are second-lowest in the county, its commercial rates the lowest.

While praising the growth that he has presided over, Clough asserted that his administration is not lax in representing the city’s best interests.

“We once had Super K-Mart wanting to build on a site ... right next to the current library. We took a pretty good stance because we felt it wasn’t the appropriate location. ... [W]e felt that if they were going to expand they should do it along I-90. And that’s the type of approach we’ve taken with a lot of development that’s occurred in the city – if it’s not in the right location, we try to offer other locations and if we can’t do that then we’re not afraid to go to court to make sure that we protect the community.”

That 29-acre parcel of undeveloped land west of Porter Library was recently transferred to the Westlake City School District as part of a major land swap between the city and the district. It is slated to become the site of a new elementary school. In exchange, the city obtained 42 acres next to Meadowood Golf Course, the Parkside Intermediate school property, and the former Board of Education building.

Clough said that city will explore adding athletic fields, walking and biking trails, and a sports complex on the newly acquired land. A new aquatic center at Peterson Pool is part of the Recreation Master Plan. Another project being developed is a new community center.

Responding to a question posed earlier by Jim Chillemi, president of the West Shore Chamber, Clough claimed that his proudest accomplishment during the past 32 years has been the Westlake Recreation Center.

“I tend to believe that the quality of life in our community couldn’t be as good as it is without the recreation aspect,” Clough explained.

Membership in the center, open to residents and employees working in the city, has remained strong – 10,000 members making more than 600,000 visits last year – in spite of the many private fitness facilities opening in Westlake.

The city completed several major roadway projects in 2016, notably on Detroit Road running the length of the city and on Bradley Road between Center Ridge and Hilliard. This year will bring more orange cones – farther north on Bradley, at the intersection of Canterbury and Center Ridge, and on Columbia south of Center Ridge. The interchange at Columbia and I-90 will be reconfigured to improve traffic flow.

Clough, already the city’s longest serving mayor by a wide margin, will likely have another four years to continue the strategy of controlled growth backed by sound fiscal management. He is unopposed on the November ballot.