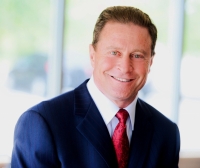 The Cuyahoga Community College Foundation board of directors awarded its 2017 Heath Oliver Distinguished Director Award to Louis G. Joseph in recognition of his exemplary service to the college and its students for more than a decade.

Joseph, president and CEO of The Brewer-Garrett Company, joined the Foundation board in 2001 and dedicated himself to making higher education accessible to residents of Northeast Ohio.

The Westlake resident and his wife established a scholarship fund with the Foundation in 2012 to help degree-seeking students meet their academic goals at Tri-C. The Valerie & Lou Joseph Endowed Scholarship Fund supports students in the College’s Honors Program Fellowship.

"If you know Lou at all, you know that everything he does is done with passion and a purpose,” said Rick Chiricosta, chairperson of the Foundation board. “He has been way more than just a board member for 16 years, and no one is more deserving of this recognition than him.”