Bay Village going 'green' one water bottle at a time 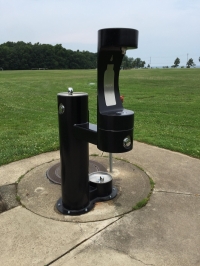 A water bottle refilling station has been installed south of the soccer fields in Cahoon Park. Photo by Jennifer Hartzell

The first outdoor water bottle filling station in Bay Village was installed at Cahoon because there are so many people who use the park on a daily basis. Further, there are countless children who use Cahoon Park for sports such as soccer, lacrosse, cross country, and various practices for extra-curricular sports in town. The water bottle filling station features the bottle filler, a drinking fountain, as well as a drinking bowl for dogs.

The Green Team is aware that it may take a little while to catch on, but they are very hopeful that the fountain will eventually help drastically decrease the amount of plastic water bottles brought to Cahoon. As I have written a few times in this column, bottled water is a problem on many levels.

First and foremost, the amount of plastic produced to bottle water is staggering and is very bad for the environment. Currently only about 5 percent of plastics are recycled and 40 percent go into the landfill. The rest (55 percent) end up in our ecosystem, specifically our waterways. Lake Erie has one of the highest levels of plastic pollution of the Great Lakes.

Second, water bottled in plastic is full of chemicals from the plastic that leaches into the water.

Third, bottled water is extremely expensive: bottled water costs between $0.89/gallon to $8.26/gallon and tap water costs about $0.50 a year if you drink the recommended 8 glasses a day. Tap water is monitored by the EPA and is tested multiple times a day, with published results; bottled water is regulated by the FDA which requires only weekly testing and does not publicize results.

The Bay Village Green Team is also gifting a water bottle refilling station to Bay Village City Hall, which should be installed in the near future. This location was chosen as the drinking fountain at City Hall was already broken and the Green Team noticed that elected officials are always provided plastic water bottles at Council meetings. The Green Team has encouraged the City to stop giving Council plastic bottles, and it was stopped for a short time, but has started again over the last year. Maybe the Bay Village City Council members will bring their own cup or water bottle for filling before meetings? Time will tell, but the Green Team has made it easier for them.

It is my hope that one day bottled water will be taboo, much like cigarette smoking has become. Yeah, people do it, but far fewer are doing it and it is becoming less and less socially acceptable. As long as we have safe drinking water coming from our tap – which we are lucky to have – it is a waste of money and resources to drink bottled water. You can help by bringing your own bottle or cup and refusing single use plastic like bottled water!

And lastly, the Bay Village Green Team would like to thank The Bay Village Foundation for funding this important project and the City of Bay Village for installing the water bottle refilling station as a gift in-kind.