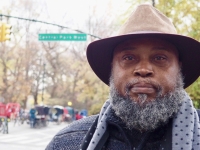 Raymond Towler will visit Corporate College West to share the story of his wrongful incarceration.

Raymond Towler spent nearly three decades in prison for a crime he didn’t commit. He’s free today because of the Ohio Innocence Project.

The exonerated man will visit Cuyahoga Community College (Tri-C) this fall to discuss his long and winding journey to justice. Hear his story at noon on Tuesday, Oct. 10, at Tri-C’s Corporate College West.

Towler will be joined by longtime attorney Alec Berezin, who will discuss the Ohio Innocence Project and its efforts to free the wrongfully convicted. Berezin serves as president of the group’s Northeast Ohio Board of Advocates.

The Ohio Innocence Project – based out of the University of Cincinnati College of Law – has proven the innocence of 17 individuals since its founding in 2003.

DNA testing conclusively proved that Towler did not commit the 1981 juvenile rape and assault for which he was wrongfully convicted. Attorneys and law students spent six years working on the Cleveland man’s case before securing his freedom in 2010.

Towler is the longest-serving wrongfully incarcerated inmate to be released in Ohio history. He was 24 years old when he entered prison and 52 years old when released.

His visit to Tri-C is linked to the College’s Common Reading Program, which this fall involved the nonfiction book "Just Mercy" by Bryan Stevenson. The powerful narrative details the struggles of those wrongfully convicted.

The free program at Tri-C will be held in room 112 at Corporate College West, 25425 Center Ridge Road in Westlake. No registration is required.