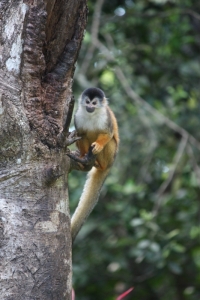 A squirrel monkey visiting our lodge in Costa Rica. Photo by Jennifer Hartzell

I am very fortunate to have recently visited Costa Rica. In addition to being a tropical, sunny, beautiful and lush destination to visit from Cleveland in February, Costa Rica was one of the first countries to promote “eco-tourism.” According to the International Ecotourism Society, ecotourism is defined as “responsible travel to natural areas that conserves the environment and improves the well-being of the local people.”

As we got off the plane in San Jose, one of the first signs we saw read, “The earth does not know what to do with plastic.” As we walked further into the airport, there were separate recycling receptacles for plastics, for paper, for glass and aluminum. Furthermore, in 2017, Costa Rica ran entirely on renewable energy for 300 days. Their renewable energy comes from: 78 percent hydropower, 10 percent wind, 10 percent geothermal, and 1 percent solar.

Costa Rica boasts over 3,221,000 acres of protected land including 26 national parks, 58 wildlife refuges, 32 protected zones, 15 wetland areas, 11 forest reserves and 8 biological reserves. Over 30 percent of its national territory is marked for conservation. In 2012, it was the first country in the Americas to ban hunting, which has resulted in unparalleled biodiversity.

While I was there, I stayed on the Osa Peninsula on the southwest side of the country. On the Osa Peninsula is the Corcovado National Park, which is the largest national park in Costa Rica. National Geographic has described Corcovado as “the most biologically intense place on earth” with over 13 different ecosystems and sustaining 2.5 percent of the world’s total biodiversity.

There are 150 butterfly species, 500 bird species, 124 mammal species, more than 5,000 plant types and over 10,000 insect species. Some of the endangered animals found in the park are the tapir, jaguar, cougar, ocelot, giant anteater and red-backed squirrel monkey. Corcovado is home to the largest primary rain forest on the Pacific coastline, meaning that it is the only remaining old-growth wet forest.

On the vacation we did not enter the Corcovado National Park, however we hiked alongside of it to a waterfall where we had lunch and swam. The sound of the insects in the forest was incredible. As we hiked along we saw many leaf-cutter ants and bird species. We also saw a green and black poison dart frog, that apparently has enough poison to kill eight humans. Luckily our fabulous guide warned us not to touch it!

During the entirety of the trip, we saw so many cool plants and animals, birds and insects. Squirrel monkeys visited our lodge almost daily, and we could hear the barking-like sounds of the howler monkeys all around us. We watched macaws fly by and saw dolphins in the Golfo Dulce. We toured a local chocolate farm and rode horses to a waterfall up in the mountains. We watched the sunset over the mountains and listened to wildlife we had never heard before. Unfortunately, we were not able to see the humpback whales that go to the gulf to breed annually in the protected, warm waters. They are most likely to be seen there between August and October, which is during Costa Rica’s rainy season.

Costa Rica has a stable, democratic government with friendly people and so much to see and do. The water is safe to drink and the food was exquisite. Every day we had a wide variety of fresh, tropical fruits to eat and freshly caught, delicious seafood. We drank directly from coconuts, ate plantains and locally made chocolate, and discovered how tasty yucca is. It was my first time to Costa Rica and it certainly will not be my last. If you are able, I highly recommend visiting Costa Rica and experiencing their ecotourism.