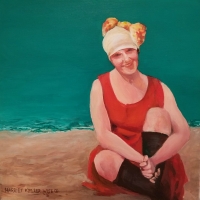 "Wilma on the Beach," by Harriet Wise, features the artist's mother at Lake Erie in the 1920s.

Currently on view in the Dianne Boldman Education Gallery at BAYarts is work by a trio of women who have painted everything from adorned chickens to ornate teapots. The women are Harriet Wise, Susanne Dotson and Mary Burkhardt. Wise is mother to Dotson, and Burkhardt is their dear friend. The exhibition is aptly titled "Mother/Daughter/Friend." And their story is a sweet one.

Burkhardt and Dotson met in the commercial interior design industry in 1989. "Susanne was a manufacturer's rep and I was an interior designer," explains Burkhardt. "We both had art backgrounds, but our careers left little time to devote to doing art. We both took a few evening drawing and painting classes at the Cleveland Institute of Art, but it wasn’t until 2004 when we started painting regularly together. Susanne’s mom, Harriet, has a wonderful studio space in her basement in LaGrange, Ohio. The three of us met there almost every Saturday during the winter months from 2004 until 2018. I treasured our Saturday painting time so much I would drive through snowstorms in order to paint with Susanne and Harriett. The three of us have painted together and inspired each other for the past 14 years."

The current exhibition came about because of their connection. "Susanne and I have had individual shows at BAYarts and we thought it would be great for the three of us to have a group show. Our paintings resonate well together," says Burkhardt, whose particular paintings focus on females.

"My current work is a collection of female figures dressed in beautiful flowing gowns set against unexpected landscapes. By incorporating a contrasting background or an unusual element I seek to create compelling compositions encouraging the viewer’s own narrative. I am inspired by fabric, especially if it is swirling or moving. I love to break down the highlights and shadows into abstracted shapes that create folds and wrinkles signaling the essence of movement or action." Along with fabric, city skylines or lighthouses often pop up as a theme she uses "for a sense of place or direction, finding your way home."

There is also more than one occurrence of fish in Burkhardt's artwork. Her "Best Day Ever" painting shows a woman in a stylish green Marilyn halter dress holding a bagged goldfish. The fish represent luck and happiness, says the artist. In the piece titled "Fortitude," a woman with a long, red gown stands in front of Lake Erie, holding a massive trout to her side, up against the fabric. It's a powerful stance, with the wind dragging shapes through the dress around her. The artist says this particular fish represents courage and endurance. "It's about taking charge or control of a situation in order to reach a goal." It is a woman on a mission.

Susanne Dotson is currently in graduate school at the Columbus College of Art and Design, about to enter her second year to earn an MFA. "I sold my business, retired and promptly embarked on a long-held dream to earn this degree as well as to be immersed into my art. When I left college with a BFA from the University of Akron, I wanted to go to grad school; who knew 44 years would intercede before I fulfilled that idea!"

Having grown up on a farm since age 14, much of that life comes into her art. This includes the satirical "visual story" that is the "Combs Family" portrait series. As Dotson writes, they have "risen from the humble coops and cornfields of Ohio to wealth and prominence." Four generations of the Combs family are displayed. This includes Ruby Rose Combs Cornish (a socialite), C.F. "Trip" Combs III Esquire, and Aunt Bitty Combs.

In a piece with bold, vibrant colors, chickens are seated at a table. "The 'Chicken Dinner' painting is part of an absurd thought about how usually the chickens are the dinner and of course, now they are dining at the table. What are they going to dine on?"

Dotson's sense of sly humor also comes into play with her piece titled "The Grecian Urn with Wallpaper Sky." "That piece with the urn and the tractor was part of a fun discovery," she says. "The Greeks did not have a 20th-century tractor. I like to chose the element of the sky, paint it as wallpaper pattern. The inversion of inside elements and installing them outside, are a part of adding humor to art." Having actually driven tractors in her youth, the artist here also brings in a piece of herself. And this brings us to her mother.

Born in 1924, Harriet Keller Wise is a fifth-generation native of LaGrange. She has long been an artist, having participated in different exhibitions and juried shows since the 1970s. Most inspired to paint the small, daily items she finds around her, she has created paintings of teapots, wire hangers and spools of thread.

Of Harriet, Dotson says, "She is an inspiration to us all to keep working at what we love and what gives us happiness."

One stand-out piece is titled "Wilma at the Beach." It shows a woman in a red vintage bathing suit and bathing cap. When asked, it is confirmed that the woman is Wise's own mother at Lake Erie in the 1920s.

All of this work will be on display at BAYarts until Oct. 6. Original works and prints are both for sale from the artists.

Jessica Stockdale is the Marketing Manager at BAYarts.