Motivation to manage my diabetes 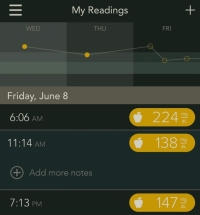 A smartphone app tied to a "smart glucose meter" uses captured data to produce a line graph of glucose readings.

When I was first diagnosed with type 2 diabetes, I became very regimented. Taking glucose readings twice a day, following dietary restrictions recommended by my primary care physician, asking for a doggy bag at the beginning of a meal when eating out to right-size the portion, and other adjustments became the norm.

I can laugh about this now but I remember saying in a sarcastic tone, “What do you mean by I can only eat a cup and a half of cooked pasta??” and rolling my eyes. You’d be shocked at how little a cup and a half of cooked pasta is! It’s a miracle, too, that I wasn’t in the dog house that night! With my wife's commitment to adjusting our meal plan to diabetic-friendly Asian cuisine, combined with motivation from the since-retired uber internist Dr. Walborn, I controlled my diabetes without medication for over a decade. I even lost more than 40 pounds in the first year.

Eventually, though, I had to start taking medications to stimulate my pancreas to produce insulin. I still want to manage my diabetes to a point where I don’t need to take medication!

Wait, where is the digital world connection?

When my wife and I started to recalibrate my diabetes management regimen with the goal of becoming medication-free again, or at least reduce the medication dosage through better control, it was time to replace my decade-old and failing glucose meter. I was also curious how 10 or more years have evolved the meter. As expected, there were handful of “smart glucose meters” on the market.

Those smart meters alone can’t connect to the internet (yet) but by communicating with an app on your smartphone, you can do many things with the captured data. In that sense a single droplet of blood harvested from the prick of a finger, with the right circuitry in the meter, can diagnose more than glucose levels.

Older “dumb” meters already logged readings and many gave a running average. The apps can log, average, visually show a graph, and do much more. Visual representation of the data shown as a line graph with peaks and valleys adds new understanding when cross-referenced with the notes you typed into the app so you know, for example, which foods to avoid.

Another way “smart” devices come to enrich your lives. Now if only the digital world can find me that elusive motivator of a primary care physician.

Strategist and technologist with over 25 years of experience. Holds Bachelor of Science in Computer Information Science and Executive MBA from Cleveland State University.

As Founder of the Center for Aging in the Digital World, a 501(c)(3) nonprofit empowering seniors with digital literacy, Tak connects the dots to help people utilize appropriate technology in their personal and professional lives.

Read More on The Digital World