The Ellenwood Family of Bay Village 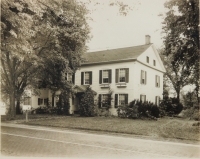 The Ellenwood house at 28838 Lake Road was quite the showplace.

I wish the Bay Village Historical Society had more information on this family. We know more about the house they lived in.

We can track the Ellenwood family to 28838 Lake Road in 1903 because their daughter, Mrs. George Denison, recalled a conversation about the age of the house with a visiting priest who remarked that his father built it in 1853. (Although, we know this date to be false today. The house was more likely to have been built circa 1830. However, the priest's father could have worked on an addition as there were many added on to the house.)

We do know Mrs. Ellenwood was a very tiny lady as we have a brown satin traveling suit circa 1880s on display at Rose Hill Museum. The Ellenwoods were great travelers. One journey was to London, England, where Mrs. Ellenwood purchased some clothes at Worth & Co.

Their house in Bay Village was considered quite a showplace. The clapboard, center-hall colonial house was located north of Lake Road just west of the Huntington Estate and east of the Osborns. Since it sat on the lake and the front door faced the lake there were only small yard plantings around the house so as not to obscure the lake view.

Across Lake Road, on the south side, the Ellenwood property stretched to Porter Creek on the west side. Mrs. Ellenwood planted many beautiful large flower gardens along the road and creek. She was noted for these beautiful flower beds.

Mr. C. Ellenwood was a businessman. He built the Westlake Hotel in Rocky River. Mr. Ellenwood and George Denison would develop the farmland on the south side of Lake Road into the Long Beach Parkway Estates. The estates offered an easement pathway with access to the lake.

Criteria for building a house in the 1920s were very strict and needed to be followed to the letter. Every house built at the time needed to be a certain size with many requirements attached.

Mrs. Ellenwood’s daughter, Marion – Mrs. George Denison – built a house on the lake next door to her mother on the west side. (This house was later purchased in the 1950s by Sam Sheppard.) Mrs. Denison was civic minded and an active participant in the Bay Village clubs.

Asahel Porter was the original owner of Lot #94. He left Dover Township in 1816 and Mr. Baker purchased and built this house around 1830. I think the same man who built the Foote farmhouse in 1828 probably built the Baker house as there are many similarities.

The language of the period would have said it had “timber framing” (barns were timber framed) and the ridge beam, in the attic, across the top of the house, had five sides. Very unusual. Less then 1% of houses had a five-sided ridge beam like this.

The four corners of the house were cut from solid chestnut and were wider than 24 inches square. The center hall foundation, to hold the house up, contained six of these posts. Furring was found in the flooring on the north side of the house.

The house was 4,400 square feet. Lee Peterson had the house taken down piece by piece by Andy, an Amish carpenter, and stored, later to be rebuilt in another location.

The only building left with any association to the Ellenwood family is the house at 421 Long Beach.