Bay women lauded by League of Women Voters of Ohio 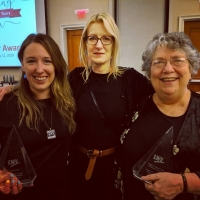 From left: Lauren Orrico of Bay Village, Audrey Morris of Shaker Heights, and Susan Murnane of Bay Village accept awards from the League of Women Voters of Ohio.

Lauren Orrico, from Bay Village, was named the second winner of the Belle Coit Kelton Rising Star Award from the League of Women Voters of Ohio (LWVO). Lauren is currently the Membership and Leadership Development Director of the League of Women Voters of Greater Cleveland (LWVGC) and a member of the Bay Village Chapter. The awards took place May 11 in Columbus at the LWVO Inspire! Gala that celebrated the 100th anniversary of the League.

In her role with LWVGC, Lauren executed the first-ever all-Greater-Cleveland new member brunch, was the architect of a networking and a "speed dating" program on volunteering, and has worked with Cleveland State University to create the first-ever student chapter. She has her sights set to do the same with Baldwin Wallace University. As an attorney, Lauren helped broker an agreement between Greater Cleveland and the Western Reserve Historical Society for an exhibit to open in spring 2020 tentatively titled "Women and the Struggle for Political Power."

Also honored was the Greater Cleveland League, winner of the LWVO Community Impact Award whose co-presidents are Susan Murnane, also of Bay Village, and Audrey Morris of Shaker Heights. League of Women Voters of Greater Cleveland was cited for its strong voter registration program with outreach to diverse communities.

The non-partisan organization was a major contributor to the Fair Districts redistricting reform initiative where LWVGC recruited, trained, managed, energized and communicated with volunteers. In 2018, under the leadership of Murnane and Morris, LWVGC hosted nearly 20 public policy issue forums and a number of successful candidate forums, including the only public forum to feature the two 2018 candidates for Ohio Secretary of State. It operates a strong Observer Corps and members sit on different city commissions and committees.

After retiring from teaching English at Lakewood High School, I now write, cook and cycle as well as teach writing at TriC. My husband, Bill, and I have lived in Bay Village for 30 years and have raised three children here.