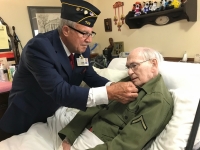 The Westlake home care team from Hospice of the Western Reserve (HWR) honored and thanked Corporal James “Norris” Jett for his military service in post-World War II Europe with a family Veterans Recognition Ceremony at his home recently. The ceremony is part of the nonprofit agency’s Peaceful & Proud program, which pays special tribute to those who have served in the military.

Family, friends and neighbors gathered as HWR volunteer Don Stark, a Vietnam War combat veteran, read a moving passage about what it means to serve, thanked Corporal Jett for his service and presented him with a commemorative veteran’s pin and certificate. He also received a patriotic flag-themed afghan handmade by a Hospice of the Western Reserve volunteer.

Jett's wife, Thelma, was presented with a red, white and blue ribbon honoring the sacrifices of family members who were left to carry on back home while their spouses served overseas. Stark also acknowledged the service of two additional veterans attending the family ceremony as guests, presenting them with their own commemorative pins.

Jett entered into active service in the U.S. Army based in Ft. Jackson, South Carolina, on May 8, 1951, serving until April 23, 1953. During his tour of duty, he served overseas in both France and Germany. For an interval of time, all three Jett brothers were on active duty during the same period.

Laurie Henrichsen is Public/Media Relations Manager for Hospice of the Western Reserve.