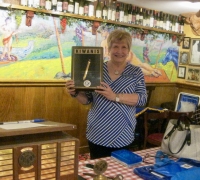 The Westlake Kiwanis gathered with the Bay Village Kiwanis at Buca di Beppo in Westlake on Tuesday, Aug. 27, for food, fellowship and competition.

Every year the Kiwanis clubs of Bay Village and Westlake hold a joint meeting of their members to highlight each club's past year's accomplishments and to plan for upcoming projects. The annual interclub meeting is also a friendly competition to see which organization can have the highest percentage of membership in attendance.

Since 1984, the winner is awarded a specially designed plaque with a gold-colored, nickel-plated railroad spike representing the Nickel Plate Railroad which divided the two townships at the turn of the century. The runner-up also receives a railroad spike, albeit a rusty one, on a plaque that states "There's always next year."

After Bay Village won the Golden Spike four years in a row, Westlake has won it five years in a row by winning this year's competition by having 70.7% of their members present, topping Bay Village's 61%.

Westlake will be displaying the Golden Spike at their meetings while Bay Village will be looking forward to next year.