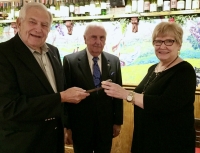 Oct. 1 ushers in a new Kiwanis year and the Westlake Kiwanis installed their new officers. Immediate Past President Suzanne Rusnak passed the gavel to incoming President Ray Budoi at their October meeting. Rusnak thanked the club for all their help during her term, helping making it a successful Kiwanis year. Budoi thanked Rusnak for her service.

Budoi laid out his agenda for the coming Kiwanis year, hoping to connect with the local community and to continue to serve the children of Westlake. Please consider joining the Westlake Kiwanis to help serve the youth of Westake.