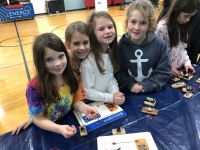 The students at Westerly Elementary school had a visit from a company called COSI, Center of Science and Industry. You can visit them in Columbus. The COSI worker set up centers for the whole school to do experiments with and we got to try a lot of cool stuff!

Another thing we really liked was a center that was all about circuits. At the center, the goal was to make a fan spin or turn a light on. First there was a plank that had these stubs on it. Next, there were these wires and we connected them to each plank. It was hard because they were small. Then there was a small plank with a fan. When you connected a battery plank without a fan it would light up. If you use a fan then the fan turns on and the light doesn't.

There also was a center where you got to build your own track with different shapes of wood. It took us a while to come up with something. We finally made something and figured out how to work it. We didn’t give up!

One last center we would like to tell you about was a center where you had a tuning fork and when you banged the tuning fork on this circle platform it made a sound like someone was humming. To hear the sound you had to put it close to your ear. If you put it in a bowl of water after you hit it on the circle, the water would splash everywhere!