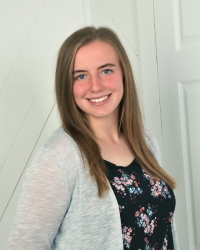 Stephanie Randar, a 2020 Westlake High School graduate, received the Jeffery Owen Marriott Memorial Scholarship at the Senior Awards Banquet Night earlier this year. The scholarship was established to celebrate the life and contributions of WHS 1992 alum Jeffery Marriott, who passed in March 2015. This was the fifth consecutive year a scholarship was awarded to an exemplary WHS student in honor of Marriott. Of special note was the fact that the WHS awards ceremony occurred “virtually” with all awards and scholarships distributed via an online, streamed ceremony.

Academically, Randar excelled in the classroom, helping her softball team earn the Ohio Team GPA Academic Award in 2019, as well as being recognized as a Southwest Conference Scholar Athlete of the Month in basketball and an All-Ohio Academic Award in soccer. The Westlake High School athletic department selected Randar for the 2020 National Federation High School Award of Excellence.

“It was obvious that Stephanie was a terrific scholar athlete throughout her time at Westlake High School,” said Elise Orr, a friend and board member of the Jeffery Owen Marriott Memorial Scholarship. “What set Stephanie apart from the other candidates, however, was her positive outlook and compassionate nature. We received many excellent applications with terrific students and leaders, but we agreed Stephanie mirrored Jeff’s kind, caring and friendly nature, above all.”

In fact, beginning her junior year, Randar founded and served as president of the school’s Project Support club which coordinated after-school activities for students with physical and/or mental challenges. She was also involved with several extracurricular activities including Leadership Challenge, Student Council, Key Club, Students Against Destructive Decisions, and Spanish Club.

Assuming classes are in session, Randar will attend Clemson University’s Calhoun Honors College in the fall, where she will focus her studies on biology and pre-med.