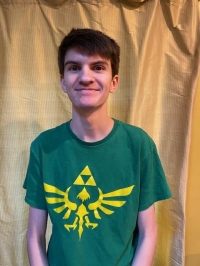 The Bay Village City School District announced that 11 students have been recognized in the 2021 National Merit Scholarship Program, an annual academic competition for recognition and college undergraduate scholarships.

These students were identified based on their Preliminary SAT/National Merit Scholarship Qualifying Test (PSAT/NMSQT) scores.

Here are the 2021 Bay High School students that are recognized:

Samuel Ferry has applied to several colleges and universities, including Princeton University, Oberlin College and The Ohio State University. He is undecided regarding his course of study. While at Bay High School, Sam is involved in Marching Band and National Honor Society.

Abigail Donahue plans to major in physics and minor in English at a to-be-determined college, and then attend law school to pursue a career as a patent attorney. She is involved in many extracurricular activities, including several clubs and Swim Team (captain), and she plays the alto saxophone in the Jazz Ensemble, Symphonic Band and Marching Band. Outside of school, Abigail works as a lifeguard and has earned the Girl Scout Gold Award.

Ryan Duffy is hoping to attend Purdue University, University of Notre Dame, University of Michigan, Embry-Riddle Aeronautical University or The Ohio State University to study mechanical engineering or aerospace engineering. Outside of school, he is involved with Marching Band on the Drumline, Cross Country, an Appalachian Service Project and has attained Eagle Scout status. Ryan also enjoys classic car restoration as a hobby and side business.

Cooper Lyons is looking to attend either Case Western Reserve University, Washington University in St. Louis, The Ohio State University or Babson College. He plans to pursue a business management or finance degree with a focus in entrepreneurship. After receiving his undergraduate degree, he plans to pursue an MBA. Outside of class, he is a captain of the basketball team, a member of National Honor Society, a class officer and a Student of the Year candidate for the Leukemia and Lymphoma Society.

Molly Mullahy is looking to attend one of these institutions: University of Notre Dame, Northeastern University, Boston College, Northwestern University, Dartmouth College, Middlebury College, or The Ohio State University. She plans to pursue architecture, mathematics, business or pre-law. At Bay High School, she is on the tennis and lacrosse teams, and she participates in the Walk MS fundraiser for multiple sclerosis.

Kayla Poling is hoping to attend Case Western Reserve University, The Ohio State University or Cleveland State University. She wants to study general chemistry, and specialize in biochemistry or materials science. Kayla is President of Bay High School's Sexuality and Gender Alliance, and works in set construction and stage management as a Bay High Thespian.

Emma Spirollari is looking to attend Stanford University, University of California Santa Barbara or Northeastern University after graduation to follow a pre-med track with a minor in French. At Bay High School, she is involved as a class officer, Project Earth club, volleyball and tutoring.

Of the 1.5 million students who took the 2019 PSAT/NMSQT, only 16,000 earn Semifinalist status, putting the three Bay Village students in the top 1% of students nationwide. Beckwith, Bish and Ferry must submit an application to be named a finalist and continue on in the National Merit Scholarship competition. About 15,000 semifinalists are expected to advance to the finalist level, and more than half of those finalists will win a National Merit Scholarship, earning the Merit Scholar title.

"We are so proud of these 11 students and all that they have accomplished their last four years,” said Bay High School Principal Jason Martin.

"What an amazing honor for these 11 young men and women,” said Bay Schools Superintendent Jodie Hausmann. “They are not only leaders in the classroom, but also within our community.”

Students who achieve finalist status will compete for more than $31 million in scholarship awards. The 2021 National Merit Scholarship winners will be announced in four nationwide news releases beginning in April and concluding in July.