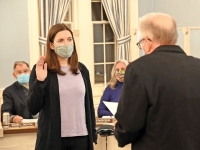 Sara Byrnes Maier is sworn in to the office of council-at-large on Jan. 25. Photo by Denny Wendell

Council voted 4-2 in favor of Byrnes Maier’s appointment to fill the rest of the at-large term expiring in December, pending her resignation as the Ward 3 representative, which she did immediately after her confirmation passed.

In discussing the nomination process, several Council members stressed that Byrnes Maier followed the protocol laid out by the city’s charter for applicants.

“I think it was a credit to Sara Byrnes Maier, her approach in this entire process has been to be as hands off as you can imagine and doing this as formally as the process would request, even much more so than I think was required by the charter,” said Tom Kelly, the city’s other at-large Council member.

After serving on the steering committee for the city’s Master Plan in 2016, Byrnes Maier originally applied for the at-large position when it became vacant in early 2017. The appointment went to Stainbrook and Byrnes Maier ran for and won election to the Ward 3 seat in November of that year. She was re-elected in 2019.

“While I remained interested in serving in an at-large capacity,” Byrnes Maier said, “I am glad to have run for and been elected to Ward 3 to serve my neighbors and as a way to learn the process and get acclimated to being on Council. When Nancy stepped down in December I decided to apply to the vacancy. While I did consider waiting until November [for the open election], I did not wish to run against a newly seated member of Council who would also then be my colleague.”

The two Council members that voted against Byrnes Maier’s confirmation, David Tadych and Lydia DeGeorge, expressed confidence in their colleague but disagreed with her nomination.

“When we embarked on the interview process I sought to select an individual with knowledge and abilities in areas that would be different from our existing Council and that would complement and complete our Council skill set,” DeGeorge said before the vote. “Fitting that criteria, an applicant ... rose to the top for me and it’s not the same individual as our nominee. However, I have the utmost faith that the nominee will skillfully perform their duties and I offer my support as they do so in their position as Council-at-large.”

Two audience members tuning in via Zoom raised questions about the process that ultimately resulted in swapping one vacancy for another and suggested Council had engaged in back-room dealing.

Kelly defended the majority’s decision, stating: “My vote is not intended to be a reflection of anything other than my appreciation and admiration for [Byrnes Maier’s] hard work and for what I believe is a deserved opportunity. While I can appreciate that there might be some resistance or reluctance or concern that we selected one of our own, I’m very comfortable ... that this pick was made the right way.”

The city received 30 applications in all, four of which came after the deadline and were invalidated. Five applicants withdrew before the interviews began, resulting in a pool of 21 interviewees that featured a range of backgrounds and some impressive resumes.

Two of the applicants were former Bay Village councilmen-at-large, one applicant previously served on the city’s Tree Commission, others are officers in Bay Kiwanis and the Westlake-Bay Village Rotary Club.

About one-third of applicants interviewed came from Ward 3 and would be eligible to reapply for the new vacancy.

In an interview after the meeting, Council President Dwight Clark said that this process was unique for three reasons. First was the record number of applicants. He attributed the increase to several factors, such as greater interest in legislative activity during the pandemic, including hybrid virtual/in-person Council meetings, which allow more residents to attend. Heightened interest in national, state and local politics might also have contributed to the desire of many candidates to apply.

Second, he said, in this age of the digital interview, much thought was given to holding public interviews, but Council members determined that doing so would convey an unfair advantage to candidates with interviews scheduled later in the week.

Lastly, Clark related that this was the first time he could recollect that a sitting Council member applied for an open seat.

Clark expressed hope that the interest in the at-large vacancy would translate into more candidates running for office in November. Five of the seven City Council seats will be up for election, including each of the four ward seats and the at-large position detailed in this article. Candidate paperwork is due at the Board of Elections by the middle of June.

But first, Council needs to fill the Ward 3 opening created by Byrnes Maier’s transition to the at-large seat. To be eligible, an applicant must be a resident of Ward 3, a qualified elector, and not employed by the city, school district or county. The term expires Dec. 31.

Interested applicants may send a letter of interest and resume or list of qualifications to Joan Kemper, Clerk of Council, 350 Dover Center Rd, Bay Village, Ohio 44140 or by email to jkemper@cityofbayvillage.com. Applications will be accepted until Monday, Feb. 8, at 4:30 p.m. Applications received after that date and time will not be considered.