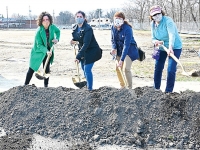 The project, which has been in the works since early 2017, was delayed several times – most recently by the coronavirus pandemic. The new building was almost scrapped entirely in 2018, after residents voiced displeasure with the proposed design. Following a renewed commitment to the project from city officials, CCPL hired a new architecture firm that focused on the history and culture of Bay Village and its existing architectural styles to create a facade that better fit the city.

The redesigned building also comes with a bigger price tag –  CCPL’s construction budget for the new, 17,000-square-foot branch is $9.2 million, up from an estimated $7.5 million at the start of the process. That figure includes nearly $500,000 in private donations for what Strobel termed the “special wish-list items ... that help make a library unique to its community.” Donors included the Bay Village Foundation, Friends of the Bay Village Library, Bay Kiwanis and a number of Bay Village residents.

Library customers can look forward to a slew of upgrades over the current branch building, including more meeting and study rooms, dedicated spaces for children and teens, innovation center, second-story reading area, outdoor patio, fireplace, and cafe with vending machines.

“Our staff are thrilled to have reached this milestone in the process!” Bay Library branch manager Jessica Breslin told the Observer. “We are excited to be able to experience this with the community we love to serve. It has been great fun to invite our customers in to see the renderings and floor plan, which are all displayed in our current space and watch everyone literally ‘ooh and ahh’ over the new amenities. It’s been such a great way to engage in conversations with folks about the future ‘community campus’ we are building in partnership with the city. So far the indoor/outdoor fireplace and patio seem to be the crowd favorite. As a Harry Potter fan, I personally love the cozy study room under the staircase.”

Barring any further setbacks, construction is expected to take approximately one year. CCPL hopes to celebrate the new branch opening in spring of 2022.