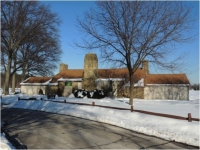 Anyone who has spent any time in Westlake has most likely enjoyed good times at Clague Park at the corner of Hilliard and Clague. The park is officially named “Clague Memorial Park” and was generously donated to Westlake (Dover Village at the time) on Oct. 26, 1926, by Walter and Sophronia Clague, the last remaining survivors of the nine children of Robert and Margaret Clague.

Neither Walter nor his sister, Sophronia, ever married and were the last of the family to reside on the 78-acre farm. Walter had planned for 40 years prior to his death to donate the land to the Village of Dover for the explicit use as a park for the residents of this beautiful area. As the inscription on the large granite monument located in the park across from the Clague family home, now known as the Clague House Museum, reads:

"40 years ago, Walter Clague desired to donate his property for a park, when the opportune time came. This desire was realized on Sat. Oct. 26, 1926, when Dover Village accepted the 78 acres on Clague Rd. for park purposes, which park to be called the Clague Memorial Park, both name and park, for all time."

However, the  land did not much resemble a park. The 12 acres where the Clague home was located is listed on plot maps as “plowed land.” The nearly 66 acres on the west side of Clague just north of Hilliard were designated as meadows, plowed land and 36 acres of woods. In fact, it was Sophronia’s wish that the wooded land remain filled with live trees. However, when roads needed to be built and development occurred, some of these trees were cut down.

Fortunately, Sophronia's wishes are still quite evident on the western border of the land that is blanketed in a large forest of trees and in areas where the city has continued to plant more trees. The foresight of the two Clague siblings certainly provided a beautiful park for all of us that will continue to welcome many people of all ages for centuries to come.

Over the years many wonderful developments have occurred on this land. One of the first was the building of the Clague Cabin located on the western end of the property. After the Great Depression of the 1930s, under the New Deal under President Franklin Roosevelt, federal funds were given to Dover Village which the village chose to use to develop the park. Fences were torn down, orchards and old grape vineyards removed, and roads built to access the parkland. Many pine trees were planted, especially on the northern property line.

A very important structure was also built: the Clague Cabin, built from native stone from quarries located by Bradley Woods. In the 1950s The Westlake Women’s Club raised funds to install indoor plumbing to provide the first restrooms in the park. This cabin has hosted many gatherings over the past 65+ years by groups of all ages. Check it out the next time you visit the park!

The Clague House, located in front of the newly constructed ball diamonds and the Clague Playhouse, is now known as the Clague House Museum and an inside visit will certainly walk you back in time to learn more about our town from the 1820s on.

I loved reading Vivian Stetz’s account of living in the Clague house after the Clague family had all passed away. She recounts that “there was no plumbing, a pump at the kitchen sink provided water, gas lights lit the rooms and chandeliers pulled down to light kerosene lamps. There were three red buildings behind the house ... a small shed type structure, a barn (now houses the Playhouse) and a larger barn.” It was a unique house but Vivian was glad when she moved!

The park has truly developed over the years – ball diamonds were added, a playground, a municipal pool, tennis courts and a gazebo used by all, many special events at Memorial Day, fireworks and car shows on the 4th of July, all-star baseball games and many family picnics. The park is filled with year-round activities.

The large ball diamonds as you enter the park have hosted many baseball and softball events. I can recall a story that my mother told about looking forward when she was younger to traveling from the city of Cleveland to Clague Park to play ball on these special fields ... imagine how she felt when she returned there to watch her daughter, her grandchildren and her great-grandchildren enjoy special games at these same fields!

Clague Pond was formed in the 1920s when Walter Clague had earth removed from an area by Sperry Creek opposite his Clague Road home. A dam was formed and the excavation filled with water – today’s Clague Park Pond. The city has created a beautiful, tranquil area to walk and enjoy the beauty of the park. It is the home of hundreds of waterfowl. Rocks have been placed along the edges to prevent erosion and the city does a great deal to maintain the beauty of this pond and the park.

How fabulous that the Clague family enabled Clague Park to happen ... What a golden, beautiful Westlake treasure!