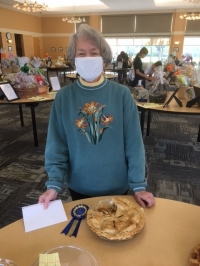 Janet Gortz was crowned the winner of Westlake Historical Society's 2021 Pie Contest held on Oct. 2. Her winning entry was an old-fashioned apple pie.

Janet said the reason she entered the contest was not only did she want to get her baking skills sharpened for the holidays, but also because it was a fundraiser for the Society. She is a big supporter of the organization, and appreciates what it stands for in the community.

Choosing to enter an apple pie was not hard … as this is the time of year apples are at their best. In preparation to find the perfect pie, Janet baked five pies in seven days and gave samples to friends and neighbors along with a questionnaire. She used the feedback from those questionnaires, as well as her own observations, and the perfect entrant was born!

Janet has been a resident of Westlake for the past 44 years. She was born in Cleveland and grew up in Parma. She has two children, three grandchildren, two brothers and a sister. Before retiring she was a certified floral arranger.

She looks forward to what the Westlake Historical Society will be doing next, especially the Wreath Placement Program.

Lysa Layne Stanton is  the President of the Westlake Historical Society. She lives in Westlake with her wonderful husband, Dave and her awesome pets.