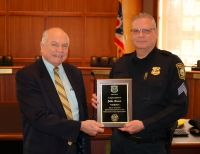 The City of Westlake held a retirement ceremony honoring Sgt. John Mauer on Friday, March 4, for his 31 years with the Westlake Police Department.

Police Chief Kevin Bielozer praised Sgt. Mauer for setting a fine example of what solid police work should look like with his professionalism and attention to detail throughout his career.

Among the family members and colleagues in attendance during the ceremony was Broadview Heights Police Chief Steven Raiff, whom Mauer worked with when he began his career as a patrolman in Broadview Heights.