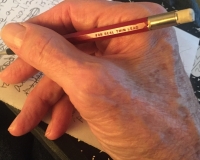 As I grab a nearby pencil on my bedside table to draft this article on family tradition I realize that it's my dad's obsolete mechanical pencil. Beet red, with a black rotator and chromed tips, it has no more pocket clip. All it says now on the Bakelite barrel, is FOR REAL THIN LEAD.

October passing into November points for me to the tradition of naming these waning months of our years in Latin, with a hidden meaning of Seven Eight Nine Ten, obscured behind an etymology of an Old Country liturgical calendar. Why do we not even pause to notice that the "tenth" month, December is now the twelfth?

Our time in any given generation is not retractable like my pencil. The internal mechanism advances or permits the user to push back the lead after a backwards twist.

At its beginnings our civilization was based on writing. The reason for the shape of our capital letter A is long known to correspond to ancient epigraphs written "as the ox plows." Back and forth went the writer’s stylus on clay tablet, or hammer into a rock.

“Post-moderns” esteem our forward social progress as conferring unmixed good. Doesn’t it offend our dignity to look back at those bygone millennia? Don’t we suffer a moral insult if we compare the ancients to our proper, forward-looking attainments as global citizens, now that we’re self-aware, emotionally intelligent? Our technically re-imagined humanity justly demands of each of its members a jealous guardianship of the greatest possible common good.

Corroded remnants retrieved from an undersea shipwreck in the Mediterranean now arrest scientific attention by online reports of “shocking” proof of the very sizeable deficit in the vision of a great, irresistible societal evolution. Those very ancient Greeks, whose classical pagan writers give us our Liberal Arts had attained such S.T.E.M. skills as to construct the Antikythera Mechanism.

Digital reconstruction of the artifact shows it clocked the heavenly bodies through 19-year cycles seen today.

Scientific practice holds the standard of longitudinal replication up to observables. Since the turn of the 21st century this test was cast to the winds. With the entrance of a distressingly more certain prospect of a chill winter that has no deterrent in this world, I am finishing this manuscript draft with a wooden pencil, that broadens each stroke inexorably to require that I get out the sharp-edged conical pencil sharpener to pare away the hexagonal wood, leaving curly waves of yellow paint inside the waste capsule.

Let the symbol of a field well-plowed and of a calendar that has regard for the moon (that its full brings forth reflected light from the West) remind us all that like the earth around the sun, its progress is counter-clockwise.

On the broken-off pocket clip of my mechanical pencil, for those interested, the manufacturer's name was Autopoint.

Born 1946 in Long Island, New York, I was raised in rural Maryland and went to college in Massachusetts. Married to Chris there in 1980 and raised three sons before moving to Utah in 2018 and coming to Bay in April, 2021. Retired gradually from a career in sharpening and repairing surgical instruments, having worked in my own mobile shop since 1988. Two sons' families now reside in Ohio with five of our eight grandchildren.