Everyone into the pool 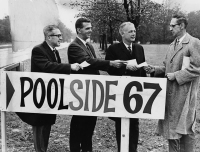 In the mid-1960s, Mayor Roman and a number of residents felt that the city of Westlake should have public swimming pool. A committee was formed and community members went to work on making a pool in Westlake a reality.

By June 1966, a group of citizens had established the non-profit organization Westlake Swimming Pool Inc., with Robert Peterson as president. Their goal was to raise $140,000 for the construction of a pool in Clague Park. The group organized a fundraising drive, collecting just under $103,000 for the effort.

The pool opened on June 17, 1967. Enthusiastic support was given to this effort by the community members, local businesses and city leaders.