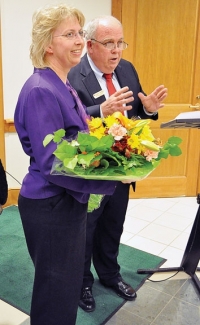 Throughout the last year, the city of Westlake has honored the pioneers and founders that have shaped the city in the 200 years since its beginning as the township of Dover. One group of individuals was particularly influential in the growth of our community –  the elected officials of Dover and Westlake.

Honoring these persons was the spark behind Clerk of Council Denise Rosenbaum’s idea to create a plaque commemorating their involvement in the shaping and progress of the city.

Starting in February 2010, Rosenbaum began an investigation into the history of Dover/Westlake’s  government to assemble a fitting tribute to past city leaders. Her detailed research involved poring over archived records at the Western Reserve Historical Society, Westlake Porter Public Library and Westlake Historical Society, as well as newspaper files, plat maps and census records.

When completed, the final list was engraved onto a brass plaque and mounted on a granite slab by Dave Rencehausen and  his staff at the service department’s sign shop and installed on a wall in the rotunda of Westlake City Hall.

“The people of Westlake and Dover are what’s made it great,” said Council President Michael Killeen. “This plaque names those who were elected, but it honors everyone [in the city’s history].”

Past and present city officials were invited to a ceremony unveiling the plaque on Nov. 3.