Mayor reflects on term in office in State of City address 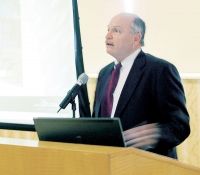 Westlake sure has changed in the last 27 years.

That was Mayor Dennis Clough’s message to Westshore Chamber of Commerce members during his State of the City address at LaCentre on March 13. Since Clough was elected in 1986, the city has undergone a period of major growth – residential, commercial and municipal.

In preparing his remarks, Clough looked back on the city’s needs in his first year in office. At that time, he felt that Westlake most needed strong financial management – not surprising, given Clough’s accounting background.

Westlake was a growing community; its population jumped nearly 40% during the 1980s, the largest increase since the 1950s. The influx of residents pressed the need for expanded civic infrastructure: additional fire and police stations, sanitary sewers, a community center and a recreation center. And as Clough told the audience of Chamber members, it was important to his administration early on to form a partnership with the business community.

“We worked hard at it, we brought people together,” Clough said. “We’ve had relationships with so many people and the support of the community to address all of those needs.”

In the 27 years since he first took office, Clough feels that the city has followed its financial plan and has successfully implemented a strategy of “controlled growth.”

“We’ve made the city of Westlake a very desirable community where businesses are thriving, where people want to be at,” he said.

Mayor Clough presented a historical record of the city’s finances during his time in office to illustrate the progress that has been made. In 1986, Westlake’s general fund held $964,000 and the total debt was over $13 million. Twenty-seven years later, the general fund tops $16.3 million, with debt at $18.5 million.

“We could basically pay that off if we needed to,” said Clough. “In essence, we are debt free.”

Westlake enjoys a good measure of financial stability due in part, Clough stated, to a diverse mix of businesses, which prevents the city from being dependent on one company or industry. Income taxes have remained flat, increasing once in the last four years, while property taxes have fallen 25% since 1986.

Mayor Clough highlighted each of the city’s departments, from the service department’s “top green shop” award, to the assistance provided by community services, to the recreation center that sits on land the city didn’t even own 27 years ago. Throughout his speech, Clough emphasized the teamwork involved in keeping Westlake running smoothly, not only within departments, but between departments as well.

Clough finished his State of the City address with a look towards the future. Work has already begun on a number of infrastructure design and construction projects and the city is evaluating a much-publicized potential switch in water supplier. Westlake is also considering regional consolidations, including a possible Westshore fire district.

“We want to make sure that Westlake remains the desirable community that it is today, where everybody still wants to move to the city of Westlake,” Clough said.