Of cats and claws, a simple solution to scratching 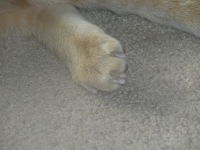 Ten thousand years ago, a family welcomed a cat into their home. This first house cat was promptly tossed back outside, upon the missus' viewing the damage done to her newly-upholstered animal hide sofa. From that moment on, mankind has been confronted with a perplexing dilemma: How to have our cats and unspoiled furniture too.

My husband and I were among the most recent additions to this centuries-long struggle this past fall when we adopted an orange tabby, Dash, from a local animal shelter. Within twenty-four hours of coming home, Dash was scratching furniture, carpet and rugs with equal gusto. We attempted to curb this bad habit, but the sprays and strategically placed scratching posts were ineffective. I didn't want to have him declawed, but I didn't want to wrap all my furniture in plastic wrap either. Fortunately I had another trick tucked in my (shredded) sofa cushions: Soft Claws.

Probably the greatest cat product since the invention of scoopable cat litter, Soft Claws allows cats to keep their claws intact and people to keep their furniture intact. The idea behind them is simple: Secure a small plastic "cap" over the nail with an adhesive, much like placing a sword in a sheath. Once on, Soft Claws enable a cat to go about its normal business of scratching, while eliminating the destruction caused by sharp claws. They come in four sizes (by weight of the cat); kitten, small, medium and large in a pack of forty caps, two bottles of adhesive with six application tips, and easy to follow instructions, all for about $21 (I bought mine at Petco, but many places sell them).

We used them on Dash and the improvement was immediate, although I must caution anyone considering this method for their own cats: Cats hate Soft Claws (at first). And until they are all on and secure, the cat's claws are very much able to scratch you while you are in the process of getting them on. When applying them to a cat who has never worn Soft Claws before, I would suggest enlisting the help of a friend, or at the very least having a pillow case or a large towel on hand to restrain the cat.

Even the most docile and friendly of cats (like Dash) can become a raging, howling beast when having its claws covered (like Dash). Once in place, it takes a cat some time to get used to the feeling, and he might try to chew them off at first. After a few days, once he's been acclimated to them he won't notice them anymore, and won't resent it as much when an old one falls off and you replace it with a new one.

Dash has since come to accept his new Soft Claws, and is doing quite well. My furniture is doing even better. And I have enough plastic wrap to last a lifetime.

I live in Westlake with my husband, Jordan, our two sons Jack and Westley, and our orange tabby cat Dash. I work part time at Kohl's, and full-time at home. In my free time I like to read, write, and cook. My family and I take part in War of 1812 reenactments throughout the summer. My lofty dreams are of traveling abroad, visiting the great museums, and drinking all the coffee. For now I content myself with antiquing and Keurig sampler packs.