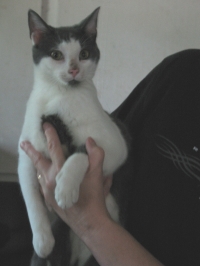 An adolescent male, one of the Reese Park cats.

At about 9 p.m. on Saturday, Aug. 10, Nancy Brown, proprietress of Hot Diggity Dog Inc., pet care business, received a phone call from Bay Village policemen. They had found a small pet carrier designed for a single pet in Reese Park stuffed with five cats. It was unclear how long the cats had been in there; they were traumatized and covered with excrement.

Compassionate people, the police officers did not know what to do. Bay Village abolished its animal control officer two years ago, and police regulations prohibit using the decrepit former city kennel for any purpose other than holding dogs on a short term basis for pick-up by the Cuyahoga County Kennel.

Nancy Brown contacted Friends of the Bay Village Kennel who stepped up to the plate. The five cats consist of two adolescent cats about eight months old, one male and one female; and three female cats between one year and three years old. FOBVK is harboring the cats at an undisclosed location, and they are doing very well. They have been vetted and found healthy. The two younger cats and one of the young females will be spayed or neutered next week.

They are lovely, social and available for adoption. The remaining two females should be spayed and available for adoption soon. To inquire about adoption, or to make a donation to help defray the costs of the cats’ medical care, please contact FOBVK at friendsofbayvillagekennel.com or FOBVK president Ruth Glasmire at 440-835-8139. FOBVK is a nonprofit organization, 501(c)(3) pending, and contributions are tax deductible.

This is not the first time that the Bay Village police have asked FOBVK to help in a crisis involving a companion animal. On July 26, a Bay Village resident found an injured golden retriever mix. The resident called the police who called Nancy Brown, and Nancy arranged for the dog to be seen by a local veterinarian at the expense of the FOBVK. The veterinarian opined that the dog’s injuries were consistent with being thrown out of a car.

Very sweet tempered, the dog soon found a forever home, and we trust that she will live happily ever after. On July 10, a policeman was called to assist a cat which had been hit by a car. The policeman called Nancy Brown who arranged for veterinarian services through FOBVK and assisted the policeman in transporting the injured cat. This story does not have a happy ending, as the cat required euthanasia.

FOBVK was formed when Bay Village had an animal control officer, and FOBVK has identified an anonymous donor who is willing to finance a new no-kill kennel if the city will commit to maintain at least a part-time animal control officer. In the meantime, FOBVK works to support and educate citizens on issues concerning companion animals and wildlife, and to connect animals in need with local animal rescues.

historian, legal historian, former tax lawyer My book, Bankruptcy in an Industrial Society: The History of the Bankruptcy Court for the Northern District of Ohio will be published by Akron University Press next spring.