When silence is golden 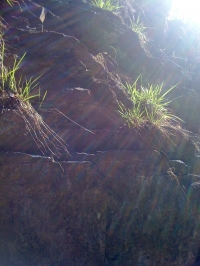 It’s easy to lose yourself amidst golden rays of a silent moment when language matters not. Photo by Kathy Luengo

With a quick show of hands, who merits a gold star for exemplary English usage? If unsure about how high to raise your arm, you are not alone. Rise up and reaffirm that English is not easy!

For instance, errors in choosing when to use: who/whom, affect/effect, its/it’s, lay/lie, (and the list goes on), commonly occur.

“Lay” and “lie” complicate matters because they’re irregular verbs that challenge those striving for their star. The simple past tense of lie (to recline) is lay and the past tense of lay (to put or place) is laid, and it’s all downhill from there. (No lying!) This is why “place the book on the table,” or, “he rested on the recliner” may be welcome workarounds.

The million dollar question is whether the need to circumvent our language’s many challenges results from: sleeping through too many English classes, having other priorities, lacking practice (if you don’t use it, you lose it), relying too heavily on autocorrect and spellcheckers, or any combination thereof.

Disclaimer: There is no “million dollar” prize for answering correctly in whole or in part.

Linguistic anomalies can make one’s head spin. How did we manage to have the word “discombobulate” without there being a “combobulate?” Who can “dis-” something that doesn’t exist?

If your goal is to impress, tread lightly with internet search results regarding this conundrum. Modern-day knights galloping to the rescue now offer “combobulate,” “recombobulate,” and “bobulate.” In your quest for the star, it would be advisable to wait until they pass the spellchecker.

IrRegardless [sic], language evolves, but not always for the better. Topping the list is an idiom so overused by the media that it continues to offend one’s sensibilities. Commentary in venerable news publications in New York and Chicago has failed to halt its proliferation. Let’s give it a good old Westshore try!

“Went missing” defies logic and is capable of inducing mild anxiety among more sensitive populations. Descriptive alternatives abound and include: “vanished,” “disappeared,” “wandered off,” “failed to appear,” “can’t be found,” “hasn’t been seen since,” “has been missing since,” “whose whereabouts are unknown” and "is feared missing.”

The sound of “went missing” can evoke a cringe similar to that which occurs at the sound of a long fingernail scraping mercilessly across a chalkboard. It’s an idiom reported to originate in Britain long ago. Let’s send it back, posthaste!

Almost as unsettling is reading or hearing that a car “had its windows broken, had its tires slashed,” etc. We all know that the only time a car has a mind of its own is when it’s taken in for servicing and the rattle “goes missing” during the test drive!

Why not take a lesson from your automobile? You have the same power to expeditiously eliminate noise. All it takes is quick click of the remote control the next time a newscaster utters “went missing”!

While not a million dollars, but still quite good, silence is golden!