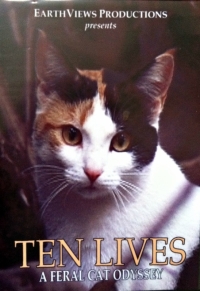 On Aug. 20, I attended a workshop for community cat activists at the Euclid Public Library sponsored by Euclid Beach Feral Cat Project, Waterloo Alley Cat Project, and the Cleveland Animal Protective League. The movie "Ten Lives: A Feral Cat Odyssey" was shown, followed by information about the APL’s expanding Trap Neuter Release (TNR) program in Cleveland and Cuyahoga County. Leaders of EBFCP and WACP described how they became involved in caring for community cats and demonstrated trapping techniques.

The term community cat represents a continuum that ranges from feral cats to more social un-owned outdoor cats that receive care from a community of people. Feral cats are domestic cats that were born in the wild and cannot be adopted as house pets because they were not socialized to humans as kittens.

"Ten Lives: A Feral Cat Odyssey" describes the lives of community cats and corrects common misconceptions about them. Un-owned outdoor cats have lived near humans in social groups called colonies for 10,000 years. They live off of human food waste, rodents and, to a lesser extent, birds, but they are not a significant cause of the decline of wild bird populations (humans are).

The movie tells how several communities have successfully implemented TNR programs and humanely managed cat colonies, from San Jose, Calif., to Havana, Cuba, to Parliament Hill in Ottawa, Canada, and the Coliseum in Rome, Italy. In these colonies, feral cat populations have declined significantly over time through careful management. "Ten Lives" can be viewed for free at feralcatsusa.org.

The Cleveland APL has offered grant-funded, low-cost TNR for outdoor cats in Cuyahoga County since 2008, and the city of Cleveland provides a per-cat subsidy for its residents to voluntarily use the program. Relying solely on residents and volunteers to trap, return and care for the cats, the APL has spayed/neutered more than 26,000 cats and kittens since then. The program has been successful in reducing stray cat intake at the Cleveland APL by approximately 15 percent, from a high of 5,532 admissions in 2011 to 4,837 admissions in 2013.

When San Jose, Calif., adopted a city-wide TNR program, its cat admissions to the animal shelter declined 25 percent. The Cleveland APL hopes to expand TNR programming by securing the support of local governments and animal control officers. If you know of a feral cat community that you would like to help, contact Sara Dillenkofer, coordinator of the APL’s animal welfare clinic, at 216-377-1624. In 2013 Friends of the Bay Village Animal Kennel assisted residents to TNR 23 cats and kittens. Additional information can be found through Alley Cat Allies, alleycat.org.

In 2009 Euclid Beach Feral Cat Project began to TNR and care for feral cats, and to rescue stray and abandoned cats and kittens in the neighborhoods around historic Euclid Beach. Operated entirely by volunteers with privately donated funds, EBFCP has helped more than 1,500 cats. EBFCP also works with PetFix and other sponsors to provide free and low-cost spay/neuter clinics in the Collinwood neighborhoods.

Currently, EBFCP cares for more than 100 cats at the Euclid Beach Mobile Home Park and 15 cats on the Euclid Beach lakefront. In June 2013 the lakefront was transferred to Cleveland Metroparks, and Metroparks has allowed EBFCP to continue to care for the feral cats that were living there when the transfer took place.

In 2009 the Waterloo Alley Cat Project also started to TNR and care for the feral, stray and abandoned cats and kittens along the Waterloo Road shopping district in Cleveland. WACP has spayed and neutered over 150 cats, found homes for others, and currently manages three feral cat colonies in the neighborhood.

historian, legal historian, former tax lawyer My book, Bankruptcy in an Industrial Society: The History of the Bankruptcy Court for the Northern District of Ohio will be published by Akron University Press in November.