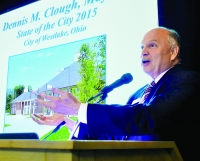 Westlake Mayor Dennis Clough praises city employees in the audience during his State of the City address on March 10. Photo by Denny Wendell

In 1986, when a young accountant settled into the mayor’s chair, Westlake was just beginning to stretch its legs. Thirty years and seven re-elections later, Mayor Dennis Clough sits atop a city burgeoning with commercial, industrial and residential growth. His lengthy tenure may not have been part of his original plan but there is no doubt about the pride he takes in guiding the city through remarkable expansion.

Mayor Clough reflected on his time in office during his annual State of the City address to the West Shore Chamber of Commerce on March 10.

“I can tell you I did not envision I’d be around 30 years,” Clough said. “Believe it or not, I still have fun and I recognize that the most important thing in public service is not only to make sure that your community is a safe place to work and raise family but also that you improve the quality of life for the community.”

At the core of Clough’s administration is maintaining controlled growth through good planning and fiscal stewardship. Surrounding himself with department heads that share a similar vision has allowed for a consistent approach to development.

“Thirty years – that’s a long time ago. The city of Westlake didn’t resemble what is today and what it has become," said Clough. "We had no Crocker Park 30 years ago. Downtown was the corner of Dover Center and Center Ridge, which was geographically the center of Westlake. We’ve really come a long, long way.”

In addition to Crocker Park, the city has attracted many new businesses over the years, from small shops to national corporate headquarters. Economic development incentives – including tax breaks or grants for community reinvestment, storefront renovation and job creation – have spurred that growth.

In the financial portion of his address, Mayor Clough contrasted today’s figures with those from 20 years ago, the earliest data at hand. Last year alone, the city issued building permits representing more than $175 million in commercial development; in 1994 that figure was close to $6.5 million.

“We didn’t allow just anything to happen in the city of Westlake. We controlled the type of growth. And that all started with good planning. We didn’t want a bedroom community where all the burden of paying taxes was simply on the residents. We wanted a diversified mix, and that’s what we have.”

The total assessed valuation for property within Westlake has also skyrocketed in the past two decades, exceeding $1.3 billion in 2015 – an increase of more than 70 percent since 1995. Mayor Clough stressed the importance of high valuation in keeping millage rates low; Westlake’s residential and commercial property tax rates are among the lowest in the county.

“If you have a larger valuation," Clough explained, "you don’t have to impose higher taxes because one mill can raise a whole lot more dollars over $1 billion worth of assessed valuation [compared to] something much smaller.”

Westlake’s government has also expanded as the city has developed. From a single, centralized building which housed all of the city’s departments, there are now five separate facilities.

“When I became mayor, everyone was in one building at the corner of Dover Center and Hilliard. Every department. Now we have departments that have their own buildings. That’s how much we’ve grown.”

Looking forward, Clough’s administration will maintain its focus on providing quality services to residents, while keeping an eye on new opportunities. The city continues to evaluate alternatives to the current water provider and discuss with neighboring communities the feasibility of a regional fire district. Plans call for the repaving of Detroit Road in 2016 and the replacement of every traffic signal in the city over the next 18 months.

A video of the entire presentation, with more financial data and highlights from every city department, is available on the city’s website.