Snippets of Bay Village History: The beginnings of the Bay United Methodist Church 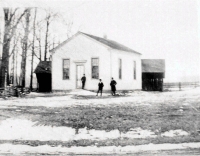 The frame, clapboard church was built on the Saddler property in the 1840s.

Which came first: the settler or the church? One wonders about this considering that the birth of the United Methodist Church in Bay Village is so intertwined with the coming of the first settlers. Names such as Saddler, Osborn, Foote, Aldrich, Drake, Cahoon, Wolf, and Tuttle are on the church roll.

After the War of 1812, William Saddler traveled through Dover Township in Connecticut’s Western Reserve on his way home to Clarence Station, New York. He fell in love with the country and purchased parts of Lots #92 and #98 along the Lake Erie shoreline from the Connecticut Land Company. He arrived in Dover with his father, Christopher, in 1814, to clear the land, and built a log cabin where Saddler Road is today. In 1815, William returned with his wife, Elizabeth Troyan Saddler, and daughter, Sophia.

The Saddler family history tells us the Saddlers were the first Methodist family along the lake shore. William’s wife, Elizabeth, along with four other faithful families were instrumental in establishing, in 1827, a church of her denomination. “Ye that stand in the house of the Lord” is a hymn from the Methodist hymnal.

Elizabeth gave a building site and most of the materials for the construction of a little church on her property. William arranged to have a raising bee for the log cabin church, built of black walnut trees cut from the premises. The new church was located on the southwest corner of Bassett and Lake roads.

In the 1840s, a frame church was erected on the site by Alvah McKinley. Seventeen members contributed to the cost of the church. The lectern and a secretary from this church are in the meditation room and parlor of the present church. Although the names have changed, this friendly church still thrives. The original members’ names became the names we see on our streets today.