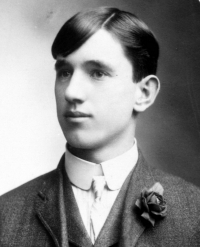 Ernest Wuebker was born in 1884 and grew up near Akron. In 1897, at age 13, Ernie came to Dover Township to pick grapes for his Uncle Henry who lived in the old Heckerman house on the east side of Bradley Road, south of the tracks. Casper, Ernie's older brother, joined him and later purchased Uncle Henry’s property. The next year, Casper invited Ernie and his mom to move to Dover. Across the street lived Gus Fortlage.

At that time, the acreage around the railroad crossing and Lear/Nagel Road was called West Dover. Shortly after Ernie arrived, the West Dover Post Office was moved from Dieterich’s store north of the tracks on the east side of Bradley Road (where Bay Commons is today) to the southwest side of the tracks in Gus Fortlage’s place.

One day Gus stopped Ernie on his way up Bradley Road and told him he, Gus, had received a contract to start the first rural mail carrier route out of West Dover and suggested Ernie be the mailman. Ernie would receive $50 a month and provide his own transportation and expenses.

So in 1904, at 20 years of age, after passing a U.S. Civil Service examination in Cleveland, Ernie started delivering mail by bicycle and on horseback. Ernie’s route encompassed not only Dover Township but also Avon and North Ridgeville townships.

Ernie bought one of those regular green RFD mail wagons that had the reins going out two holes in front, which made delivering mail much safer and warmer. Between Porter and Center Ridge roads, the Greens, who owned Green’s Garage, allowed him to leave his horse at their barn to rest while he used the Greens' horse to finish the North Ridgeville loop of his route. It was in 1916 Ernie turned to a Model T Ford in good weather. So, in accordance with the motto, "the mail always went through."

Ernie married Alvina Peters and raised his family on Bradley Road in the 1850 Thomas Powell house. Alvina’s grandparents were Tom and Sophia Saddler Powell. In 1923, Ernie built a colonial house south of the Powell house at 584 Bradley Road. Delivering the mail had served Ernie well.

In the early years there was not a person in western Westlake and Bay whom Ernie did not know by name and sight because of his occupation. They saw him often and he became their confidant and trusted friend.